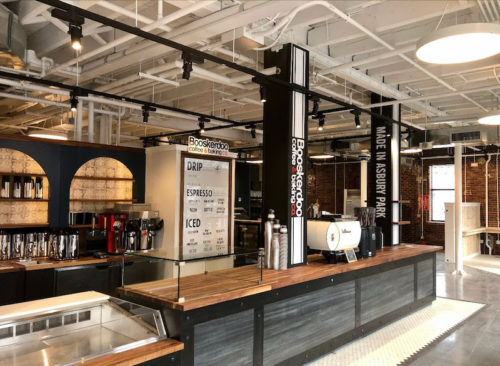 The interiors of the yet-to-open Booskerdoo, above, and Bottles, below, which opened in November. (Photos by Trish Russoniello, Booskerdoo and John T. Ward. Click to enlarge)

Located at 200 Monmouth Street, across Bridge Avenue from the Red Bank train station, the building got a massive overhaul and addition from owner Metrovation, culminating years of on-and-off development.

Its first tenant arrived in October, when ad agency Sawtooth Group moved into the fourth floor of an addition.

Next came Bottles by Sickles, the first foray into the alcohol business by Bob Sickles and family, owners of Sickles Market in Little Silver.

Now, four years after they announced plans for it, the Sickles family is finally slated to open a food market called, simply, Sickles, on the first floor, marketing manager Tori Sickles tells redbankgreen.

The store, which had been targeting a January debut, is now scheduled to open at 10 a.m. April 8, she said.

Previous plans to call the store Sickles Provisions have been dropped, she confirmed.

Within the store’s footprint, and opening the same day, is Booskerdoo Coffee Company, according to the company’s own announcement.

The shop, owned by James and Amelia Caverly, began in 2013 as single location business on River Road in Fair Haven, and now has shops there and in Monmouth Beach, Asbury Park, the Bellworks complex in Holmdel and Bronxville, New York.

An atrium featuring timber salvaged from the former Seattle Times building separates Bottles from the food market. A new parking lot on the north side of the building permits customer access from the lot and the Monmouth Street frontage.

The Sickles family has run its Little Silver market since 1908 on a farm that traces its roots to the 1660s.