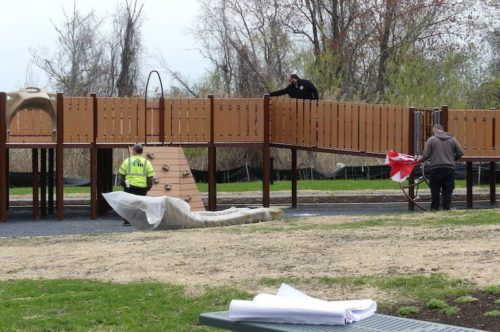 The 1.25-acre wetlands site on the Swimming River/Navesink River, at the western end of Locust Avenue, is now host to prefab structure that will serve as place for kids to romp and for everyone to take in a river view at a place that’s visited by bald eagles, deer and more.

The lookout affords a clear, 180-plus-degree view over the the phragmites to the river and the future site of a Monmouth County park at Chris’s Landing on the opposite shore.

Still to be installed: a rubberized safety surface and slide; a new fence along Leighton Avenue – with gates to be locked after hours, to prevent vandalism; signage; information plaques and other touches, said public works Director Cliff Keen.

And unlike a trouble-plagued restroom installation project at Eastside Park, which is also nearly complete, Keen said he “can guarantee” that Bellhaven will be ready whenever Governor Phil Murphy lifts his executive order closing state and county parks to limit the spread of COVID-19, which local officials followed by shutting down borough parks.

Contrary to earlier assertions, however, Bellhaven won’t include a “some sort of binoculars” to enable birdwatching. Keen said a similar device at Riverside Gardens Park and was removed because of lack of use by the public.