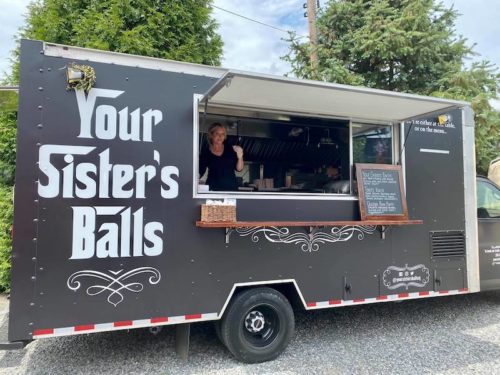 A food truck called Your Sister’s Balls hopes to set up “a few days a week” on a Shrewsbury Avenue lot. (Nicole Montecalvo photo. Click to enlarge)

Less than a year after the latest effort to remove Red Bank’s ban on food trucks got a flat tire, the issue is back.

Leading the charge: a food truck called Your Sister’s Balls. 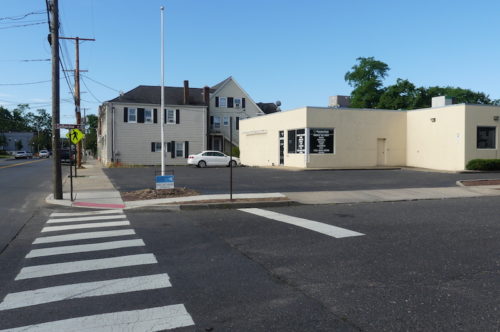 The owner of 204 Shrewsbury Avenue has invited Your Sister’s Balls to use the vacant site. (Photo by John T. Ward. Click to enlarge)

During the borough council’s workshop meeting, held online Wednesday evening, Mayor Pasquale Menna said he had received “a number of inquiries” about the ban on food trucks, and asked whether the council was willing to revisit the issue “in light of COVID.”

Food trucks are banned from borough streets, and can operate only on private property with approval by the mayor and council, according to Business Administrator Ziad Shehady.

That’s the case with trucks that have operated in the past at the Sunday farmers’ market at the Galleria complex on West Front Street, Shehady said. The town’s only other food truck, Gus’s Hot Dog Truck, which has its own parcel on Shrewsbury Avenue, is grandfathered by virtue of having started operations before the ban, he said.

“I’m still for food trucks,” said Councilwoman Kate Triggiano. “They bring economic vitality, smaller businesses, more diverse business owners have an opportunity who can’t get into brick-and-mortars. The list goes on and on.”

But Councilman Ed Zipprich pushed back, saying now is not the time to allow food trucks.

“In light of the pandemic and the way our downtown businesses, especially our food service businesses, I don’t think it’s a good idea to introduce food trucks while we’re trying to keep our business community alive,” Zipprich said.

Triggiano, though, said that was a “snag” that the issue has previously gotten caught on.

“There’s this idea that food trucks are some sort of competition for existing businesses,” she said. “This is the same conversation that we go around in a circle on. They’re two different markets, but we can keep having that conversation until we turn blue, I guess.”

“We’re looking out for our downtown business community,” Zipprich replied.

Menna suggested officials “recirculate some information on it among ourselves and then see if we want to revisit the issue.”

Just minutes later, during the public comment portion of the meeting, several speakers – including a mother and daughter who own a food truck, and a property owner who’s ready to host them – lobbied for council action.

Nicole Barbarino Montecalvo, of Colts Neck, who operates Your Sister’s Balls with her mother, Debra Greiner, told the council they hoped to park their truck “a few days a week” at 204 Shrewsbury Avenue, which she said was “not near the restaurants.”

“I get the whole thing with the restaurants and that you don’t want to impact the businesses in Red Bank,” she said. “We don’t want to step on anybody’s toes. I really don’t feel like we’re competition to any of them.”

The truck sells meatballs, calzones and other Italian dishes, she said.

Borough resident Steve Goodman, who owns the site through JADSRB LLC, “invited us onto the property and has lots of parking,” Greiner told the council. “We would like the opportunity.”

Goodman, who also owns the former Katsin’s Drugs building now under development just to the north of the site, at 192 Shrewsbury, was up next. He told the council he had intended to create a gym at Green’s, but the plan was derailed by the COVID-19 crisis.

Now, he said, he would like to host Your Sister’s Balls “as a way to introduce the property to an ongoing venture, to make people stop there and realize the West Side is alive and well, it’s not just a drive-past area.

“We do have people who live in town who do have food trucks, and I think it would be good if they were able to serve the community they do live in,” she said.

Shehady told redbankgreen that no formal application has been filed requesting council action.

A push to allow food trucks outside the central business district on sites where projects are stalled or in bankruptcy died last August when council members sided with owners of brick-and-mortar restaurants, who said trucks would unfairly undermine them while rewarding other property owners for neglect.

The idea was roundly rejected by downtown businesses located in the special improvement district managed by Red Bank RiverCenter, Zipprich said at the time.

A push for a single street spot for a food truck to operate also failed in 2011.