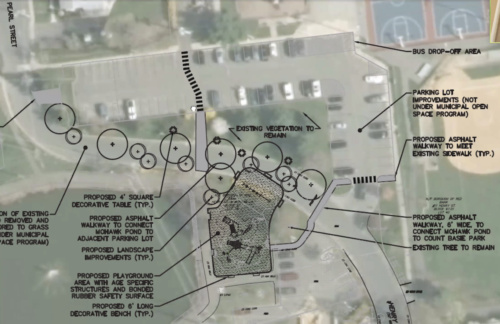 Under the proposal, most of Henry Street would be eliminated and a new playground built alongside Mohawk Pond. (CME Associates graphic. Click to enlarge.)

A street that effectively serves as shortcut past the main entrance to Count Basie Fields would be closed to traffic under a concept plan discussed by the Red Bank council Wednesday night. Henry Street and Mohawk Pond as seen in 2017. The new playground would be built on the grassy area at left. (Photo by John T. Ward. Click to enlarge.)

The closure of most of Henry Street is one element of a plan approved by the council for submission to the Monmouth County Open Space program, which provides grants up to $250,000 to municipalities for recreational aims.

At the council’s workshop session, engineering consultant Laura Neumann of CME Associates outlined a plan to relocate the existing playground from Basie Fields to a grassy area adjacent to Mohawk Pond.

She estimated the project would cost about $417,000, half of which the county grant would cover, with the borough responsible for the balance.

As part of the project, Neumann said the the administration was also “looking at” changes that would turn South Pearl Street into a dead end where it meets Henry Street. That would require vehicles to access Basie Fields via Henry Street from Newman Springs Road, she said.

The existing parking lot would dead-end at South Pearl Street, where there’s now an access driveway.

Business Admininstrator Ziad Shehady said one aim of the proposal is “to activate the area around Mohawk Pond,” where families picnic. Having children in a playground “across the street, out of sight, probably isn’t ideal from a parenting perspective,” he said.

Asked by Councilman Michael Ballard why the playground was being moved, Neumann said she had heard concerns that it was “in an awkward location, and this would enable us to repurpose that area in the future.”

A new path around the trout-stocked pond and upgraded parking lot for visitors were completed last year.

Additionally, Shehady said, the current playground site is being “debated or rather discussed or kind of considered for a community center by the Redevelopment Agency.”

The plan “cuts off a cut-through through South Pearl Street,” said Councilman Erik Yngstrom, liaison to the recreation department. “The park will still have access from both sides, but people cutting through Count Basie Park won’t be able to do that to avoid the train” crossings on Drs. Parker Boulevard and Newman Springs Road, he said.

Chief Darren McConnell said the police department “constantly get complaints about cut-through traffic.” Under the proposal, nearby residents would have “the small inconvenience” of having to use Drs. Parker Boulevard instead of Henry Street, but would no longer have cut-through traffic on their streets.

He said buses could park on Mohawk Lane, alongside the substation, and children could walk directly into the park without having to cross a trafficked street.

“We think overall, it’s a much better, much safer scenario than what we have there now,” McConnell said.

A gate to be installed at the western end of the existing 80-spot parking lot could be opened during emergencies or to allow traffic to exist after games or special events he said, but would otherwise it would be closed.

During the public comment session, South Pearl Street resident Rosaleen Perry endorsed the plan, even though it would force her and her neighbors to contend with traffic backups on Drs. Parker Boulevard.
She said speed bumps on her street, rather than deterring traffic, simply serve as a “launching pad” for vehicles speeding to and from Newman Springs Road.
“So a dead-end would be a good idea,” she said. “I think it would work well.”

The plan has not yet gone before the Recreation Committee, which includes residents, said Yngstrom. “This is just for the application to the Open Space” program, he said. If the grant is awarded, the committee and council could “tweak” the concept.