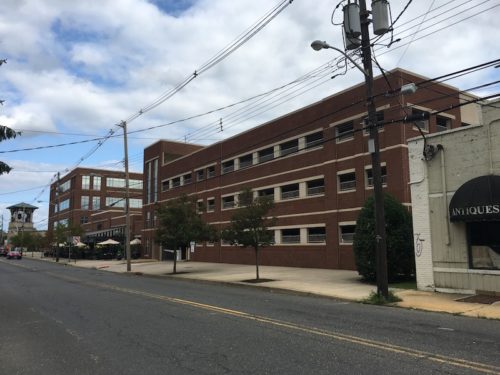 PRC will amend its proposal for 141 West Front Street, a company attorney told the board in a letter. (Photo by John T. Ward. Click to enlarge.)

The would-be builder of a massive addition to an existing building in downtown Red Bank will amend the plans to accommodate pushback, its attorney said Thursday. 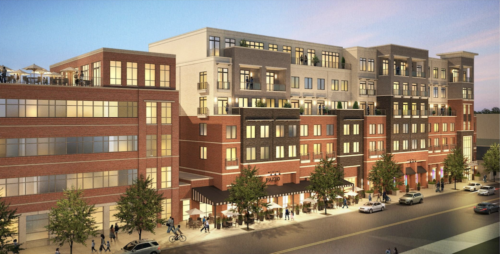 Recent changes reduced the scale of the proposed project atop Pazzo MMX restaurant. (Rendering by Feinberg & Associates. Click to enlarge.)

In an eleventh-hour letter to the zoning board, PRC Group requested an indefinite delay for a resumption of hearings on its plan for 141 West Front Street, board attorney Kevin Kennedy told the board at its meeting via Zoom.

PRC has “thoughtfully and reflectively considered and evaluated all the comments and concerns expressed by members of the board as well as the public,” attorney Peter Wersinger wrote, according to Kennedy. The company asked for the adjournment in order “to revise and rework the scope of the proposed project.”

No resumption date has been set, and PRC has consented to renotify nearby property owners in advance of the next hearing, Kennedy said.

This would be the second round of revisions. In February, PRC obtained a four-month reprieve to change the original plan.

But as previously reported by redbankgreen, board members continued to challenge the height and scope of the project, even after two rounds of shrinkage reduced the number of apartments proposed from 150 to 99, and the number of floors from nine to five.

The addition would be atop and behind the building that houses Pazzo MMX restaurant.

In other board business, a proposal by Park Valley Development to erect 32 apartments and street-level retail at 120 Monmouth Street, at the northwest corner at Pearl Street, was rescheduled at the applicant’s request for August 19. The last hearing on the application was held in April.