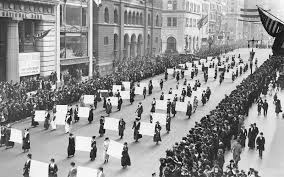 The AAUW, League of Women Voters, and T. Thomas Fortune Cultural Center have partnered with the library to present the story of the battle for the vote, with particular focus on the experience of African American women.

Living history interpreters bring the words of five women and one man to life. Susan B. Anthony and Frederick Douglass reveal the strain on their friendship that followed passage of the 15th Amendment. Carrie Chapman Catt, Alice Paul and Ida B. Wells take us to the passage of the 19th Amendment in 1920. Their dialogue explores the racial tensions that continued to test the moral compass of the movement. Finally, Fannie Lou Hamer carries the story through the 1965 Voting Rights Act.

Come celebrate the centennial of women’s suffrage and consider the sacrifices and compromises made in the name of victory.