Rowers from Christian Brothers Academy headed landward at Fair Haven Yacht Works, above, after winds of 23 miles per hour prompted the cancellation of what was to have been Fair Haven’s first regatta for high school crews Saturday.

Still, the final event of the borough’s centennial celebration went off as planned that night. An Oktoberfest celebration, held at the Smart School Preschool on River Road, prompted one attendee to don his lederhosen, above right, and other displays of civic mirth. More photos after the jump.  (Click to enlarge)

END_OF_DOCUMENT_TOKEN_TO_BE_REPLACED END_OF_DOCUMENT_TOKEN_TO_BE_REPLACED

CELEBRATING A CENTURY IN AMERICAN STYLE 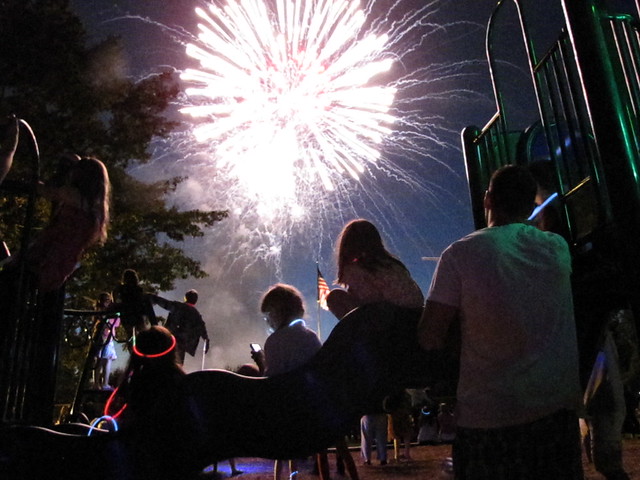 On a perfect summer day, Fair Haven celebrated its first century as an independent borough in classic American style Saturday: with a parade, a townwide picnic, and a breathtaking fireworks show that capped it all off in electrifying color and sound.

“Eat your heart out, Red Bank,” one man shouted during the finale at Fair Haven Fields.

Here are 100 photos from the daylong event by redbankgreen. And here’s to a great second century, Fair Haven. The crew from Paul Davis Partywares in Shrewsbury setting up the tent and tables at Fair Haven Fields Thursday for Saturday’s celebration of the town’s centennial. Below, Riverbank Antiques in Red Bank, which will host an open house. (Click to enlarge) After the George Sheehan Classic in Red Bank Saturday morning, there’s plenty for locals and visitors to do hereabouts on the Green. And the weatherbot says Mother Nature will cooperate, providing ample sunshine and temperatures in the mid-70s.

Here are two diversions, one indoors, and one out, both steeped in the richness of the past: Fair Haven’s Centennial, and a celebration of the reconstituted Red Bank Antiques district.

END_OF_DOCUMENT_TOKEN_TO_BE_REPLACED Town officials are hoping to determine if a time capsule featured in a 1976 celebration of the nation’s 200th anniversary at Fair Haven’s Bicentennial Hall was buried or misplaced. (Click to enlarge)

Closing in on a celebration of its centennial, Fair Haven is having some trouble tracking historical time capsules, the Asbury Park Press reported Wednesday.

With food, fireworks, music and other details of the June 16 public celebration squared away, borough officials are trying to determine whether to assemble a time capsule for posterity, and wondering past time capsules are accounted for, the Press reports.

END_OF_DOCUMENT_TOKEN_TO_BE_REPLACED Kicking off its centennial year, the Borough of Fair Haven hosted a fundraising gala at the Raven and the Peach restaurant that attracted 300 revelers Saturday night.

The $20,000 raised will help cover the cost of a daylong celebration on Saturday, June 16 that will feature a parade, a community picnic and a fireworks show at Fair Haven Fields. (Photos by Peter Lindner. Click to enlarge)