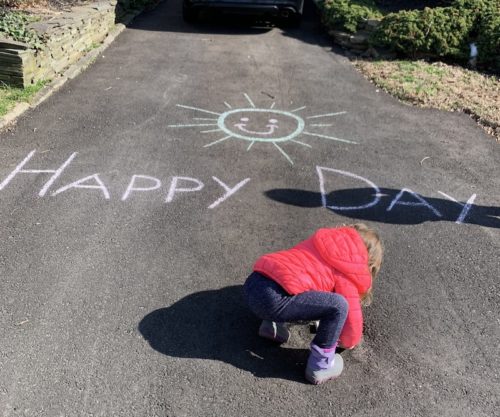 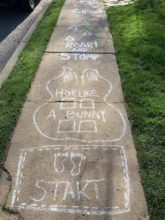 Their activities limited by the COVID-19 pandemic and Governor Phil Murphy’s “stay-at-home” order issued Saturday, neighbors on John Street in Red Bank decorated their walks and driveways with art and encouraging messages Sunday.

“A chalk walk is a perfect, socially-distanced way to get out of your house, and gives the kids something fun to do and see,” says resident Kate Mills.

END_OF_DOCUMENT_TOKEN_TO_BE_REPLACED An antipasto, above, went with this year’s food from your heritage” theme at John Street’s annual block party. Below, plating up some southern fried chicken on Elm Place. (Photo by Jim Willis. Click to enlarge) The ritual end-of-summer block party is more than just a great excuse to hang out in the middle of the street, catching up with neighbors you’ve been too busy to see all summer. For many hungry Red Bankers, it’s an opportunity to sample a smorgasbord of eats from their neighbors’ kitchens.

Take Elm Place, which has been throwing an annual block party for at least 14 years now, according to resident Tom Labetti. For the latest edition, held Saturday, a 30-foot buffet table was laden with heaping plates of fried chicken, pulled pork, buffalo wings and other potluck  staples. But many of the neighbors PieHole spoke with seemed to be mulling around just waiting for Margaret Ilarraza to bring out the Puerto Rican chicken she makes every year.