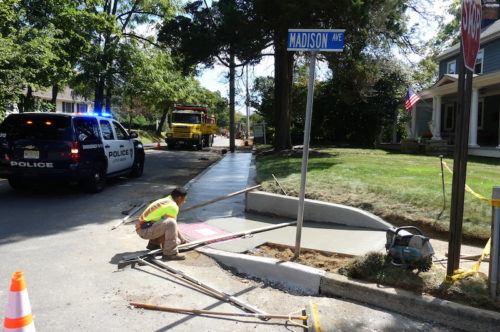 Motorists have been encountering detours on Branch Avenue at the Little Silver-Red Bank border all week long. What’s Going On Here?

It’s the beginning of a sidewalk replacement and installation program that Little Silver officials hope will reshape the walkability of the suburban town over the next year and a half. (Photo by John T. Ward. Click to enlarge.) The north end of rospect Avenue is next in line to get sidewalks. Below, markings on Branch Avenue. (Photos by Trish Russoniello and John T. Ward. Click to enlarge.) 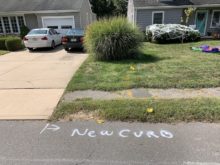 The detours marked the start of a construction project that will replace the 1.5-mile sidewalk on the western side of Branch Avenue from Madison Avenue to Sycamore Avenue.

The job, which is expected to be completed by the end of October, also calls for installing or replacing some 1,300 linear feet of curbing.

Monmouth County, which owns the road but does not pay for curbs and sidewalks, plans to repave Branch from Rumson Road to the train station, officials said.

S. Batata Construction of South River won the sidewalk contract in August with a $379,283 bid, the lowest of four, with the next-lowest at $404,400, according to borough records.

The Branch Avenue project was financed by a loan from the New Jersey Transportation Infrastructure Bank, a state government program that provides low-interest loans to municipalities. Towns pay interest on only half the principal amount borrowed.

The project is the first phase of an extensive, $2.8-million sidewalk repair and installation effort that’s expected to continue over the next 18 months or so and affect nearly every major road in town, borough Administrator and Clerk Kim Jungfer told redbankgreen.

“It’s part of a conscious effort by the mayor and council to improve walkability and safety to all three schools and the train station,” said Jungfer, referring to Little Silver Point Road School, Markham Place School and Red Bank Regional High.

Assuming approval of a second loan application now pending with NJIB that would fund all subsequent sidewalk work, the next street on the makeover list is Prospect Avenue, between Laurelwood Drive and Harding Road, said Jungfer. Work there could begin early next spring, she said.

Mayor Bob Neff noted that the northern stretch of Prospect has no sidewalks, though it serves as a primary connector to RBR.

“To see somebody out there pushing a stroller, or walking a dog, all you have to do is see that once and you know safety has to trump everything,” he said.

Neff said that, as it did with the Branch Avenue project, the borough will send out letters to property owners affected in advance of each stage of the project “so nobody is surprised” by the work.

The borough is working with homeowners to preserve newly installed driveways and aprons and address other considerations, he said.

Also in line for sidewalk installation and/or replacement over the coming 18 months are:

• Kings Road, south side, from Prospect to Seven Bridges Road.

• Silverside Avenue, south side, from Seven Bridges Road to the train tracks.

•  Conover Place and the western portion of Eastview Avenue approaching the train station.

Jungfer said the work will be scheduled in stages to minimize adverse traffic impacts.