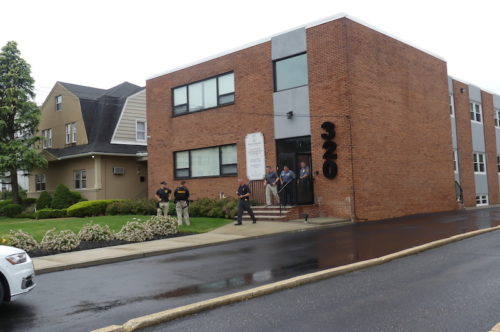 Red Bank police have identified an out-of-state “person of interest” believed to be responsible for a series of bomb threats directed at a Broad Street business, Chief Darren McConnell tells redbankgreen.

END_OF_DOCUMENT_TOKEN_TO_BE_REPLACED

Unedited police activity reports for the period of March 9 to March 15, 2013, as provided by the Shrewsbury Police Department.

 Report of Motor Vehicle Accident in the area of Rt. 35 and Sycamore Avenue on 3/10/13. Driver Theodore R. Sizer, male age 25 of Little Silver was arrested for Driving Under the Influence. No reported injuries. Ptl. Tracy Polk investigating.

END_OF_DOCUMENT_TOKEN_TO_BE_REPLACED

Two suspects are said to be in custody, stopped at gunpoint by a Rumson cop as they attempted to leave a West River Road bank they’d threatened to blow up, according to an eyewitness.

Mayor John Ekdahl confirmed the two arrests, and said the suspects had attempted to rob the bank using the threat of blowing it up. It remained unclear, however, if they in fact had an explosive device or any weapons.

END_OF_DOCUMENT_TOKEN_TO_BE_REPLACED

As of 5:20p, West River Road remained closed from First to Third streets as police detour traffic around the Bank of America branch that a suspect, said to have been carrying a suitcase, purportedly threatened to blow up.

END_OF_DOCUMENT_TOKEN_TO_BE_REPLACED West River Road is shut between First and Third Streets as Rumson police respond to a bomb threat at a bank.

Police have surrounded a Bank of America branch on West River Road in Rumson in response to a report of a bomb threat.

Authorities were still arriving on the scene at 4:45p, and a bomb squad truck had been called up.

A police scanner report said an individual with a brown leather suitcase was threatening to blow up the bank.