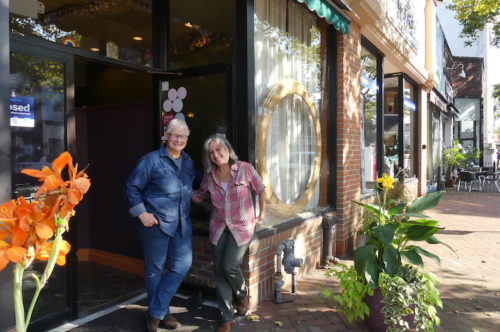 Claudette Herring and Lauren Phillips at Via45 Monday. (Photo by John T. Ward. Click to enlarge)

It was a day of mixed emotions for the owners of two Red Bank businesses as they closed up shop Monday.

At Via45, restaurateurs Lauren Phillips and Claudette Herring ended an 11-year run on Broad Street. Around the corner on Monmouth Street, Marissa Clifford oversaw the final children’s birthday party at Paint A Tee.

This 400th installment of Retail Churn has the details on those latest economic victims of the pandemic and other changes in the downtown mix.

END_OF_DOCUMENT_TOKEN_TO_BE_REPLACED

RED BANK: LEAVE ROOM FOR DESSERT AT VIA45 The rustic farmhouse chic dining room of Via45 in Red Bank, above, and an enormous serving of eggplant parmigiana, below. (Photo by Susan Ericson. Click to enlarge)

On the consistently changing face of Broad Street in Red Bank, Via45 stands out as a bastion of culinary authenticity, staying true to its Tuscan-style roots.

Owners Claudette Herring and Lauren Phillips are the unified driving force in the kitchen of this BYO restaurant, dishing up rustic but refined menu options.

END_OF_DOCUMENT_TOKEN_TO_BE_REPLACED

VIA45: WOWING ‘EM WITH WATERMELON A food critic at the New York Times gave Red Bank’s Via45 a laudatory review in Sunday’s edition.

En route to a “very good” rating, reviewer David Kocieniewski highlights Via45’s commitment to the slow-food movement and ponders the “audacious” inclusion of watermelon in a late-winter salad.

END_OF_DOCUMENT_TOKEN_TO_BE_REPLACED