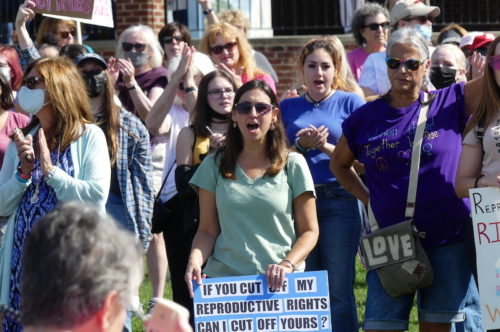 In conjunction with hundreds of similar events nationwide, the Red Bank gathering, organized by the Planned Parenthood Action Fund of New Jersey and the League of Women Voters of New Jersey, focused on abortion rights as the Supreme Court begins a new term Monday with pivotal cases on the docket.

Chanting “Ruth sent us” and “my body, my choice,” participants marched from the train station to Broad Street and then gathered in Riverside Gardens Park, where speakers, including borough Councilwoman Kate Triggiano, called for the election of women’s rights supporters.

Check out redbankgreen’s photos, below. (Photos by John T. Ward. Click to enlarge)

END_OF_DOCUMENT_TOKEN_TO_BE_REPLACED

David Burstein gives a TEDx talk on the power of Millenials.

Press release from LWV of NJ

On Saturday, October 11, the League of Women Voters of New Jersey will hold a public-welcome educational forum entitled “Engaged and Empowered: A New Generation of Leaders.”

Hosted on the Lincroft campus of Brookdale Community College, the program of workshops and presentations will discuss and explore political engagement and activism among Millennials — the generation commonly defined as those born in the early 1980s into the early 2000s.