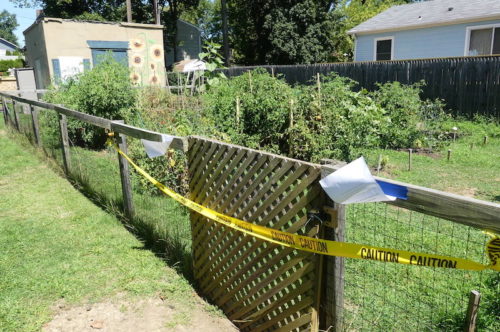 Caution tape and notices at the entrance to the community garden on Marion Street Monday morning. (Photo by John T. Ward. Click to enlarge.)

Red Bank has shut down its sole community garden out of “an abundance of caution” over possible lead contamination, the borough government announced Monday. 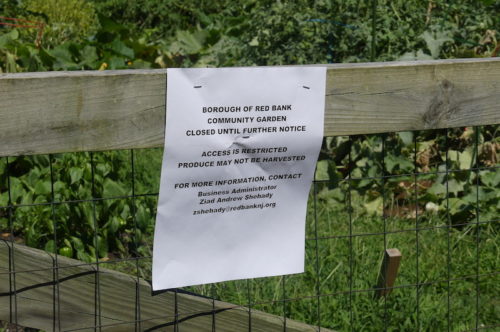 A notice posted Saturday on the garden fence. (Photo by John T. Ward. Click to enlarge.)

The action follows testing of the garden soil conducted independently by a nearby property owner, who alerted town officials Friday evening of elevated lead readings in the soil, borough Business Administrator Ziad Shehady told redbankgreen Monday afternoon.
In response to the neighbor’s claims, the town ordered the garden closed down Saturday. Via email, they alerted plot tenders not to harvest what they’ve grown this summer and to discard any produce already harvested, Shehady said.
Those who’ve already eaten produce from the plots were advised in an announcement (see below) posted on the borough website Monday afternoon to “consult with their physician about the potential for lead exposure from produce and inquire about the necessity of a blood lead test.”
Shehady said the testing, which involved soil sampling taken as much as two-and-a-half feet into the soil, was commissioned by Paulo Rodriguez-Heyman, who lives across the street from the garden and also had his own property’s soil tested.

The results sent to the borough showed “some levels of lead material in the soil” taken from various locations on the site, and at various depths, Shehady said. The concentration levels vary, Shehady said, adding that he “can’t evaluate the gravity or seriousness of the situation” at this point.

Borough officials met Monday to discuss the matter, and the borough engineer engaged a Licensed Site Remediation Professional, or LSRP, to immediately conduct its own tests, Shehady said.

Results are expected to take about two weeks to obtain, and the garden will remain closed in the interim, he said.

Shehady said Rodriguez-Heyman did not say what led him to have the test done, or report findings from his own property.

“I don’t know what prompted it,” Shehady said.

Rodriguez-Heyman is the founder and president of Renova Environmental Services, a site remediation firm based in Ocean Township.

redbankgreen could not immediately contact Rodriguez-Heyman for further information Monday.

Several lot tenders replied to the email “to inquire about the type of contamination and the steps they should take,” Shehady said. “Some people obviously would like to know sooner than later.”

The garden, on a borough-owned plot of land between two homes, debuted in 2013 after a long campaign by activist Cindy Burnham.

The site, two lots west of Eastside Park, is the location of a disused water pumping station enclosed in a shed that the town has used to store materials used in cleanups of oil and other spills, redbankgreen reported in 2012.

On Saturday, August 10, 2019, the Red Bank Community Garden on Marion Street was closed to the public out of an abundance of caution resulting from concerns of lead contamination in the soil.  The Borough was alerted to these concerns late in the evening hours the day before on Friday, August 9, 2019 and acted quickly to advise community garden members that access to the garden was prohibited and that produce should not be harvested from the garden until further notice.  The possibility of soil contamination was raised by a resident of Marion Street who did independent testing without the advance knowledge or consent of the Borough of Red Bank.  While the Borough can not rely upon the third-party data from the resident to conclusively determine if there is in fact lead contamination and if so, the scope or severity of the contamination, the Borough erred on the side of safety to advise the public and restrict access until official testing can be performed.  A meeting was held Monday morning, August 12, 2019 with various Borough officials to review the information received over the weekend and discuss a plan of action for testing.  The Borough Engineer will order an expedited test for soil and produce samples and results are expected within 2 weeks.  Until the results are received, access to the garden will be restricted and the public is advised not to consume produce harvested from the garden.  Produce harvested from the garden should be discarded. Any member of the public who consumed produce from the garden should consult with their physician about the potential for lead exposure from produce and inquire about the necessity of a blood lead test.  Additionally, Borough of Red Bank officials have been in contact with the New Jersey Department of Environmental Protection.  The Borough of Red Bank is taking this matter very seriously and will provide the public with additional information as soon as possible.