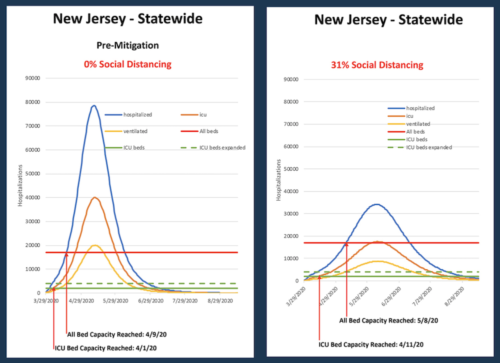 Charts used by the Murphy administration Monday show the surge in cases with no social distancing, left, and partial compliance, right. (Graphs by NJ.gov. Click to enlarge.)

With 37 more fatalities and 3,347 more patients testing positive for the coronavirus, Murphy continued to hammer home his message that residents need to “stay home” until the crisis eases.

“We need to take the necessary steps so you don’t wind up on any graph,” he said during his regular briefing on the pandemic.

The latest fatalities put the state’s death toll at 198, Murphy said. One-hundred-seventy-one have occurred in the past week, according to daily stats issued by Murphy’s administration.

A breakdown of the death toll by county was not immediately provided.

State Health Commissioner Judith Persichilli said four of the latest deaths were “associated with” long-term care facilities such as nursing homes. Those facilities have accounted for 34 of the deaths, she said.

The growth in confirmed COVID-19 cases included 134 in Monmouth County, and put the state’s total number of positive tests at 16,636.

Of 40,806 tests administered statewide to residents showing symptoms of the virus, 15,582 have tested positive, or 38.2 percent, Persichilli said.

She argued that continued, aggressive use of social distancing, as ordered by Murphy March 21, is “the only tool we have in the toolkit” to prevent a surge in hospitalizations that would swamp the state’s existing 18,000 regular hospital beds and 2,000 intensive care beds.

All hospitals have been asked to double their ICU capacity and prepare to be fully-dedicated to caring for coronavirus patients, Persichilli said. In addition, the state is preparing to open field hospitals, reopen closed health facilities, and even use dormitories and hotel rooms to house patients, if needed, she said

“We are definitely going to be preparing for the worst,” she said.

The state can effectively flatten out the impact on the healthcare system if social-distancing practices continues, Persichilli said.

Based on projections, “average” compliance could flatten out the peak of the surge by 57 percent, she said.