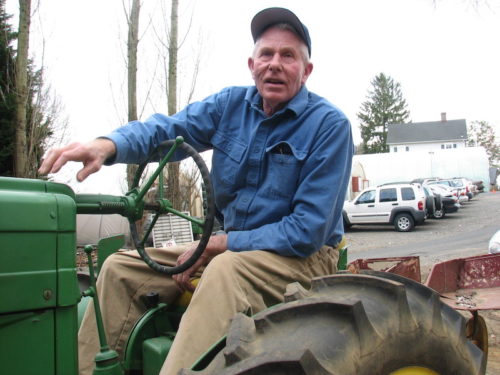 Robert Sickles Sr., the patriarch of a family farm in Little Silver that traces its agricultural roots back more than three centuries, died “peacefully at his home” Monday, according to an obituary posted by Thompson Funeral Home in Red Bank Wednesday. Bob was best known for his love of farming, and upon graduating from Admiral Farragut Academy, he elected to stay in Little Silver and continue working with his father at Sickles Farm, eventually becoming the owner. Bob continued the Sickles legacy by putting to use his strong work ethic and talent for producing delicious fruits and vegetables. He enjoyed the relationships he built with other local farmers and proudly passed on his success to the third and fourth generations who run the business today. He was deeply loved and will be greatly missed by his children and grandchildren.

redbankgreen interviewed Sickles in 2008 in advance of the 100th anniversary of his father taking over a farm that began operating more than two centuries earlier. From that article:

What we know as Sickles Market was for its first 245 years the Parker farm. The Parkers were Quakers who settled locally in the 1660s after fleeing persecution by Puritans in Rhode Island, and eventually owned a parcel of land that stretched from the Navesink to the Shrewsbury.

In the 19th century, meanwhile, the Sickleses were farming in Shrewsbury. On the present site of Lawes Coal Co., one of eight brothers, Theodore Sickles, born in 1835, built buggies, ran a general store and served as postmaster during the Civil War. Later, he owned a grocery store on Red Bank’s Broad Street, between Mechanic and Front. He went bankrupt as a result of easy credit and a partnership with an alcoholic.

But Theodore had married a Parker gal  Julia  and not for the last time would a woman save the day for a Sickles. She became heir to 21 acres in Little Silver.

“That’s how we ended up here,” Sickles says. “My father [Harold Sickles] came over here in nineteen-eight with his mother and brother, bankrupt and broke.”

In the interview, the elder Sickles said he enjoyed going into the farm’s greenhouse at night, because that’s when the leaves were up on the plants.

“All these plants, no matter whether they’re tomatoes or peppers  everything  they stick up. And that’s… that’s my thing,” he said. “When you plant something and it grows, and it produces what it’s supposed to, it really gives you a lift.”

Learn more about the history of the farm here.

A memorial service will be held at St. John’s Episcopal Church in Little Silver at a future date, according to the obituary. The family asks that in lieu of flowers, donations be made in Bob’s memory to the church.