The Basie marquee in 2018 touted a concert in memory of Smithereens’ singer Pat DiNizio, below.

Press release issued Monday  by the Count Basie Center for the Arts: 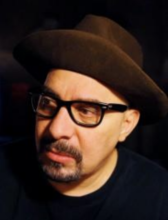 On what would have been the Smithereens’ lead singer’s 65th birthday, details were announced today for the 2021 Pat DiNizio Musical Performance Scholarship, named in honor of the New Jersey band’s legendary frontman, who passed away in December 2017.

Beginning today, interested students may apply by completing the online form and submitting an audition video at thebasie.org/dinizio. Deadline for submissions is Nov. 16 and finalists will be announced Dec. 4, 2020.

Scholarship winners can choose from any Basie musical performance program, including classes at the Basie Center Academy of the Arts, its Schools of Music and Performing Arts, or any onsite partner.

“All of us in The Smithereens began our lifelong love affairs with music at a tender age,” said Dennis Diken, founding member and drummer of The Smithereens. “It’s gratifying to know that the annual Pat DiNizio Musical Performance Scholarship at the Count Basie Center for the Arts is helping to foster creativity in young people at a time in their lives when they can look forward to following their muse with their whole lives ahead of them.”

At the time of his passing, DiNizio and The Smithereens had just announced plans for a Basie Center performance. The concert instead became a tribute to DiNizio, featuring Smithereens bandmates Babjak, Diken and Mike Mesaros, fronted by an array of vocalists including Marshall Crenshaw, Ted Leo, Gin Blossoms lead singer Robin Wilson, Scandal’s Patty Smyth, Freedy Johnston, Richard Barone, Severo Jornacion and others. The evening ended with an all-star performance of The Smithereens’ classic “A Girl Like You,” led by Rock and Roll Hall of Famer and E Street Band guitarist Steven Van Zandt.

A portion of sales from that concert and money raised worldwide during a live webcast of the show helped create the scholarship fund.