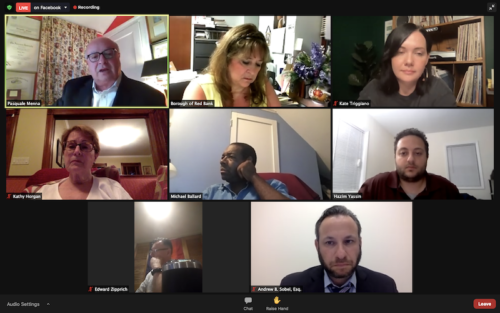 A push for a possible change in Red Bank’s form of government cleared its first formal hurdle Wednesday night.

The borough council, sharply split on other issues, unanimously agreed to the introduction of an ordinance that would put a two-part public question on the November ballot: whether a commission should be created to review the borough’s 113-year-old form of government, and if so, who should serve on it.

“Thank you council,” said Mayor Pasquale Menna. “It’s a very learned and forward-looking step all of you have taken.”

“This is an expansive experiment in the evolution of democracy,” he added, “expanding our community by not being closed to ideas, not just for the present, but that may be helpful in the future.”

Next step: a June 23 public hearing and final vote. Adoption would enable candidates for the commission to begin soliciting petition signatures required for inclusion on the ballot.

The election of five commissioners will be non-partisan, in that any adult resident can get his, her or their name on the ballot, provided they obtain the requisite number of valid signatures by a specified date.

But that date, and other particulars, still need sorting out, Clerk Pam Borghi said, in response to questions by local Democratic party chairman Zipprich, who said he’s “had a couple of inquiries from residents who are interested in running” for the commission.

Borghi said she’s had a difficult time getting “firm answers” about the process, and the filing deadline, in part because it’s a non-partisan election. Monmouth County election officials “don’t really have any information on it,” she said.

Borghi said she spoke to county Clerk Christine Giordano Hanlon and the clerk of elections, but “they really were able to give me very little guidance on the statute, which doesn’t have that level of specifics.”

Borghi said she’s trying to track down clerks, or former clerks, in towns that have gone through the process. Menna said he expected answers to procedural questions would be available for the June 23 meeting and for posting on the borough website.

Here’s a May 3 memo borough Attorney Greg Cannon prepared for the council on the road ahead: Red Bank Charter Study Memo 050621