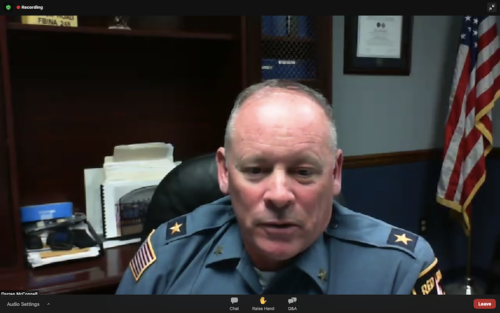 McConnell announced the program during a lightly attended online forum about school safety that he said he had begun planning prior to the May 24 murder of 19 children and two teachers in a school in Uvalde, Texas.

The RBPD has had officers making daily visits to all borough schools for several years, and participates in school emergency drills “to make sure we’re on the same page and using the same response protocols,” McConnell said.

The statement applies also to the Red Bank Charter School, St. James School and Red Bank Catholic High School, he said later. “We’ve drilled in each of those buildings,” he said.

Now in the wake of Uvalde, McConnell said he and Superintendent Jared Rumage have restarted discussions begun prior to the onset of the COVID-19 pandemic about the implementation of a school resource officer program.

The program would put an armed officer in the primary and middle school buildings, McConnell said. Under New Jersey’s SRO program, the officers must be retired police officers from the state who attend specialized training and obtain certification for the role.

Secondarily, they’re there to build rapport with students “so that, first of all, a threat may become known before it’s actually carried out,” and also to provide students access to law enforcement if they have a crisis away from school.

“Our goal is to make it a something very positive, something we hopefully don’t need,” McConnell said.

In response to a resident’s question, McConnell said the program may begin as early as September, with funding yet to be determined.

The plan would need approval by the board of education and the borough council.

Rumage, speaking on the Zoom session, told listeners that the district administration is “constantly in contact” with RBPD about improving safety.

In addition, he said, the board of ed in recent years had approved measures to improve school infrastructure as it applies to safety.

Red Bank Regional High School has a school resource officer from the Little Silver Police Department who is on campus daily.

McConnell declined to address the police response to the Uvalde shooting. But he said that locally and across New Jersey, “the way we train is that we do not wait for outside resources when there’s a critical incident” such as occurred in Uvalde, he said.

“Our officers are trained that when they arrive on the scene, they immediately enter, they neutralize the threat and evacuate the building, as appropriate,” he said. “But there is no waiting for a SWAT team or anybody else.”