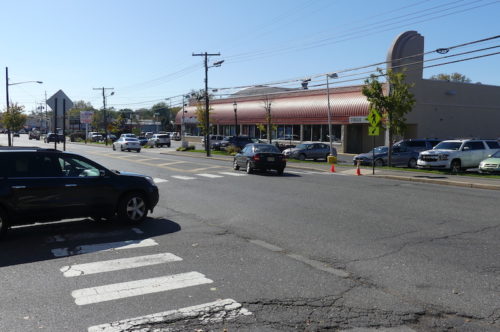 In-streeet pedestrian-crossing signs would be installed on Broad Street in front of the SuperFoodtown supermarket. (Photo by John T. Ward. Click to enlarge)

[CORRECTION: The original version of this article mistakenly reported that pedestrian-activated flashing signals would be installed at two locations in Red Bank. Only the crosswalk at West Front Street and English Plaza will get that type of signal; the intersection of Broad Street and Pinckney Road will get “in-street pedestrian crossing signs,” according to the resolution.]

Pedestrian-safety improvements would be installed at two Red Bank crosswalks, including one where a pedestrian suffered fatal injuries when struck by a truck four years ago, if approved by the borough council Wednesday night.

END_OF_DOCUMENT_TOKEN_TO_BE_REPLACED The pedestrian struck by an SUV as he crossed Broad Street near the Foodtown supermarket in Red Bank Saturday afternoon was 97-year-old Alfonso Tomaino, according to police Chief Darren McConnell.

END_OF_DOCUMENT_TOKEN_TO_BE_REPLACED Emergency personnel at the intersection of Broad Street and Pinckney Road Saturday afternoon. The same spot was the scene of a June, 2015 accident from which a pedestrian later died of her injuries. (Photo by John T. Ward. Click to enlarge)

The identity and condition of the victim were not available two hours following the accident, which occurred at about 3 p.m. at Broad Street and Pinckney Road, said police Chief Darren McConnell.