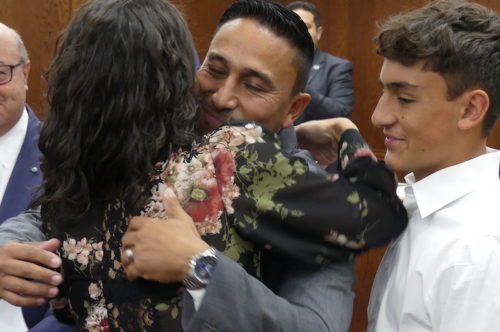 With his son, Aydin, looking on, Jorge Torres embraces his wife, Lauren, after being sworn in as a police sergeant. (Photo by John T. Ward. Click to enlarge)

The promotion of Jorge Torres was one of several ceremonies that led the borough council’s semimonthly meeting Wednesday night. 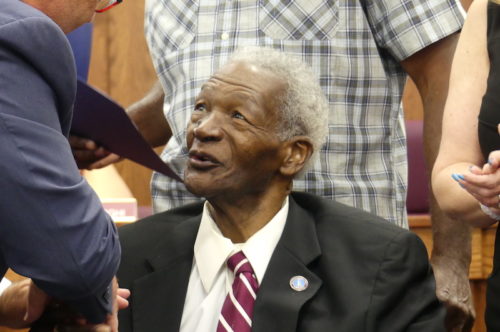 Fair Haven resident Herbert Reed, 92, was honored for decades of service as a teacher and football coach at Red Bank Regional. (Photo by John T. Ward. Click to enlarge)

• Jorge Torres, who pronounces his first name ‘George,’ moved up from the patrol unit, where he’s served since March, 2008. But the 40-year-old actually began his working career two decades ago in an apron.

Growing up, “the only two things I wanted to do was to become a cop and become a chef,” Torres told redbankgreen shortly before reciting the oath of duty. The opportunity to work in kitchens came up first, and before he knew it, he was eight years into a culinary career as a restaurant and corporate chef, he said.

But by then, he also had a wife and two children who he “never saw” because of the demanding schedule, he said.

So using his own funds, Torres said he put himself through the police academy, getting training that most other future cops get sponsorship for from their prospective employers. Within days of graduating from the seven-month program, he was hired by then-Chief Mark Fitzgerald.

Both fields, Torres said, are “about service to the public.”

After 11 years in the patrol division, Torres will now be supervising patrol crews.

The ceremony drew a large crowd of Torres family members and fellow law enforcement officials. Present were his wife, Lauren, and son, Aydin. His daughter, Alycia, who is studying in England, watched via livestream.

“He’s truly a man of service,” Councilwoman Kate Triggiano, who serves as police commissioner, told the audience. She noted that Torres had twice deployed to Puerto Rico after hurricanes Irma and Maria as part of a special task force.

That is “something I always truly appreciate hearing as a resident, that someone has their heart in service to that level,” she said.

• Legislators from the 11th district – Senator Vin Gopal and assembly members Joann Downey and Eric Houghtaling – presented a proclamation to 92-year-old Herbert Reed to recognize his 35 years as a teacher and coach at Red Bank High School and, later, Red Bank Regional.

Reed, a Fair Haven resident and Army veteran who served during the Korean war, taught English, history and special education beginning in 1957.

The former boxer also worked as an assistant football coach, and was on the sidelines for what was then considered the greatest high school football game in New Jersey history: the Bucs’ 46-44 victory over Hightstown for the Central Jersey Group II state championship in 1975.

After his retirement in 1992, Reed “stuck around for another 10 years” working with the team, he told redbankgreen.

• The Monmouth Boat Club donated $5,000 to the borough, continuing a long tradition.

Lauding the gesture, Mayor Pasquale Menna said he wished more nonprofits, “including churches,” would emulate the club, given that they pay no taxes. “It would be a lot better for everybody,” he said.

• The council honored the Boys and Girls Club of Monmouth County on its 10th anniversary of taking over a borough-owned building at the corner of Drs. James Parker Boulevard and Bridge Avenue.

The building was once the home of Bizarro’s, a “shot-and-a-beer” establishment, recalled Menna, who grew up in the neighborhood.

Executive director Doug Eagles said the club “provides not just safe place for kids” when they’re not in school, “but a place where we empower them to succeed and thrive in life.”