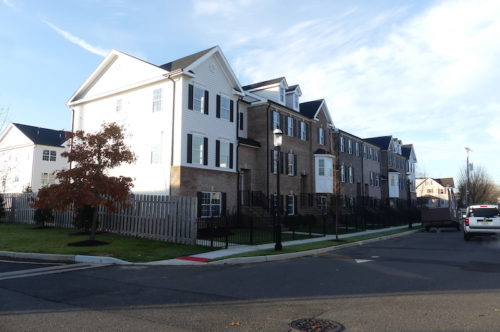 The Catherine Street side of the new Brownstones townhouse project. (Photo by John T. Ward. Click to enlarge)

Two new townhouse units on Red Bank’s West Side will be available for purchase at a fraction of their market value following a lottery next month. 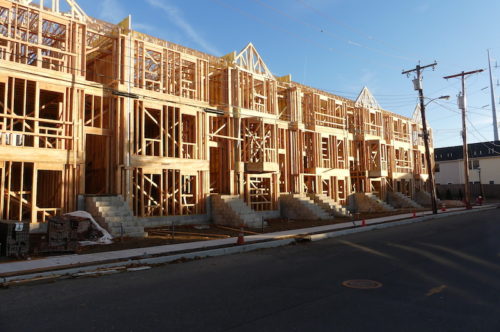 Construction is still underway on the River Street side of the 22-home project. Below, a flier specifies income limits for prospective buyers. (Photo by John T. Ward. Click to enlarge) 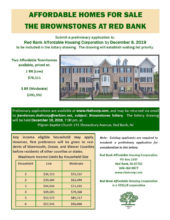 Under a drawing managed by the Red Bank Affordable Housing Corporation, a one-bedroom unit and a three-bedroom unit in the Brownstones of Red Bank community will be sold to buyers who qualify as low- or moderate-income earners, according to the RBAHC website.

Under zoning board approvals granted in 2017, the project was to include two so-called affordable units required under court-imposed mandates on municipalities. At the time, Mumford said he anticipated the two units would be available as rentals, but RBAHC is offering them for sale only.

Unlike the other 20 units, the income-restricted homes do not have their own two-car garages. Prices for homes not included in the program start in the mid-$500,000s, according to the Brownstones’ website.

To be considered, would-be buyers must submit a one-page preliminary application. by December 8.  A live drawing to establish an order of priority is scheduled for 7 p.m. on December 10 at Pilgrim Baptist Church, 172 Shrewsbury Avenue.

Posted on November 26, 2019 at 8:20 am, filed under Featured, Housing, Land Use & Zoning, Real Estate, RED BANK and tagged affordable housing, brownstones at red bank, lottery, nj, red bank, roger mumford. Bookmark the permalink. Follow any comments here with the RSS feed for this post. Trackbacks are closed, but you can post a comment. Email this story.
PREVIOUS: RED BANK: GETTING READY FIR LIGHT-UP NEXT: RED BANK: COUNCIL WRAP