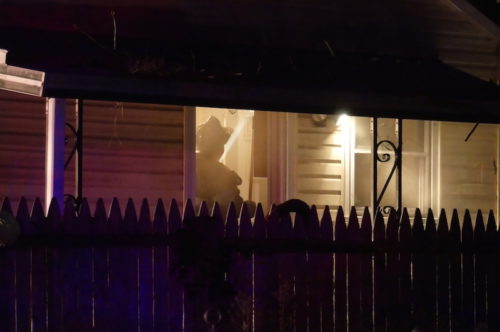 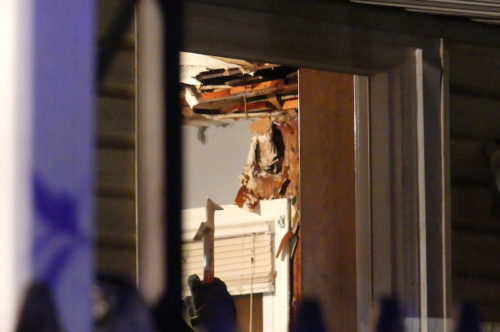 Ceiling damage was visible from outside as firefighters wound down their operations. (Photos by John T. Ward. Click to enlarge.)

Volunteer firefighters responded to a report of fire within the walls at 94 Leighton Avenue shortly after 2:30 a.m.

The tenant of the single-story Cape Cod-style house near Catherine Street told redbankgreen he had  seen flames behind the refrigerator.

After about half an hour of opening walls and pouring water on flames, firefighters extinguished the blaze.

An official account of the fire and its cause was not immediately available.

The tenant told neighbors he had relatives nearby that he could stay with. Property records indicate the home is owned by Thomas Dolan, of Hoboken.

Posted on November 8, 2019 at 4:00 am, filed under Featured, Fire, RED BANK and tagged 94 leighton avenue, Fire, nj, red bank. Bookmark the permalink. Follow any comments here with the RSS feed for this post. Trackbacks are closed, but you can post a comment. Email this story.
PREVIOUS: RED BANK: RETHINKING SHREWSBURY AVENUE NEXT: RED BANK: WATCH YOUR VEGGIES GROW