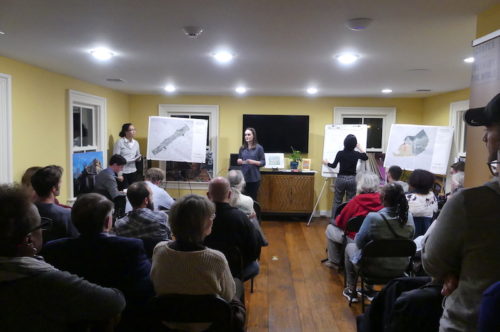 Student planners from Rutgers led the information-gathering session at the T. Thomas Fortune Cultural Center. Below, a map on display at the event. (Photo by John T. Ward. Click to enlarge.)

Worries about gentrification and pedestrian safety were at the fore as Red Bank residents gathered for a brainstorming session about the future of Shrewsbury Avenue Wednesday night. 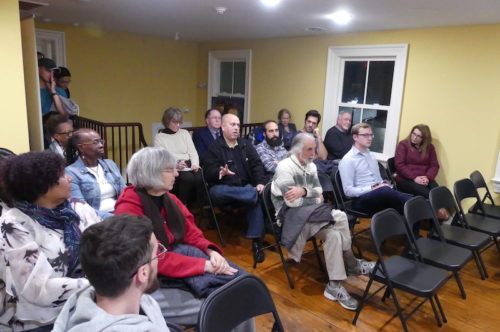 The audience at the event. (Photo by John T. Ward. Click to enlarge.)

Held at the T. Thomas Fortune Cultural Center on Drs. James Parker Boulevard, the session was led by graduate students in urban planning at Rutgers University’s Bloustein School of Planning and Public Policy. They’re participating in a “design studio” led by planners Susan Gruel and Fred Heyer, whose firm, Heyer Gruel & Associates, is based on Broad Street.

About half the two dozen or so audience members indicated that they lived in or near the Shrewsbury Avenue corridor. Asked to identify what they like about it, participants cited the area’s ethnic and racial diversity, its walkability and its small restaurants and shops, among other pluses.

But traffic, pedestrian safety and housing affordability were overriding concerns.

“It’s always been a nightmare” for senior citizens who live at the River Street Commons when crossing the avenue to visit the pharmacy and other businesses, said Amy Goldsmith, of Locust Avenue.

Nancy Blackwood of Chestnut Street said the traffic forces bicyclists onto the sidewalk “because the street is so unsafe.”

Participants also called out a need for affordable housing that has adequate setbacks from the street, as well as more public spaces, both for children to play in and for adults to gather socially.

redbankgreen was unable to stay for the entire event, which was also scheduled to include discussion of ideas for a Broad-to-the-river concept linking Broad Street and the Navesink waterfront.

The students said they intend to return to Red Bank in about a month to present a “planning document” for public consideration, said one of the students. No date for the event has yet been determined.

Last December, undergrads from the Bloustein program presented ideas for transforming Monmouth Street in the area of the train station.