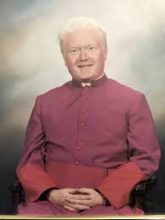 In a statement on Facebook, Menna called Lowery “a towering force for good in Red Bank, a dear friend, and a man of deep pastoral care who left his mark on the lives of so many.

“Having been blessed to pray with him these past two weeks in the stillness of the evening at his hospital bed with his brother priests and friends, I know he was serenely at peace in the knowledge that he had affected positively the lives of so many,” Menna wrote. “His legacy continues in the life examples he taught to so many.”

Borough flags will be lowered to half-staff until Lowery’s funeral, Menna said.

In addition to leading the St. James parish and its two schools –St. James and Red Bank Catholic – Lowery served for the past 23 years as Head of Chaplains for the New Jersey State Police.

In a 2016 interview with the Two River Times to mark the 40th anniversary of his ordination to the priesthood, Lowery said he had been called into service in the aftermath of the 9/11 terrorist attacks, when he volunteered to join its Task Force 1, “just to be there” for rescue workers and others on the outskirts of Ground Zero. His parish had lost six of its members in the attack.

“Everyone has a call to serve. Monsignor Lowery found his in serving God and the people of New Jersey,” Governor Phil Murphy and First Lady Tammy Murphy said in a statement issued Thursday.

The Murphys, who live in Middletown, said they “knew Monsignor Lowery first as pastor at our home parish,” St James. From the statement:

“He was one of the very first people we met when we moved to New Jersey and was a friend and mentor to his last day. He played unparalleled roles for us as he blessed our house back in 1998 before we moved in, stood beside Phil as he was sworn in to become ambassador [to Germany] in 2009 then as governor in 2018, and he played a significant role in our children’s lives through a combination of CCD and Red Bank Catholic High School. We broke bread together. He was a constant source of support, both personally and spiritually.
“He was a giant within the community – deeply devoted to his parishioners, providing spiritual guidance and support for all who needed it.
“For the past 23 years, he also served as a chaplain for the New Jersey State Police, offering solace to troopers and law enforcement families and presiding over dozens of graduation ceremonies and funerals. After the September 11th attacks, he volunteered to serve at Ground Zero as a member of Task Force 1 and, in 2005, traveled to New Orleans to minister to residents and first responders in the aftermath of Hurricane Katrina. Wherever he thought the spirits of others could use reinforcement, that’s where you would find him.
“We will always remember Monsignor Lowery for his warmth, comfort, good humor, and deep and abiding faith. May he rest in eternal peace.”

In the Two River Times interview, Lowery said it continued to be a source of personal joy “to be able to celebrate with people to liturgy,” the religious services associated with the Roman Catholic faith.

A viewing is scheduled for Wednesday  from 10 a.m. to 9 p.m. at St. James Church, with a 7 p.m. Vigil Mass. The funeral Mass will held Thursday at 10 a.m. St. James School and Red Bank Catholic will be closed both days.

Posted on November 29, 2019 at 8:50 am, filed under Education, Featured, People, Places of Worship, RED BANK, Schools and tagged monsignor, nj, obituary, parish priest, philiap a. lowery, rbr, red bank, red bank catholic, st. james. Bookmark the permalink. Follow any comments here with the RSS feed for this post. Trackbacks are closed, but you can post a comment. Email this story.
PREVIOUS: RED BANK: HOLIDAY EXPRESS TO LIGHT IT UP NEXT: RED BANK: WINTER STORM IN FORECAST