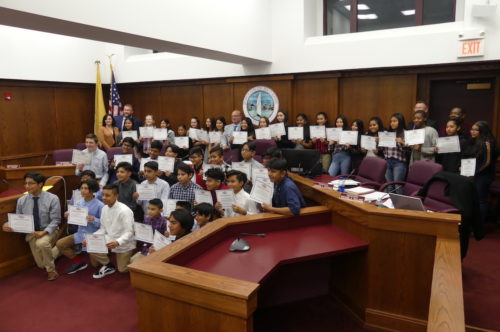 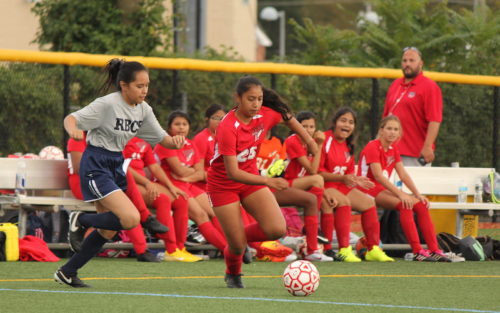 The girls’ and boys’ teams in action this season.

The girls soccer team, led by head coach, Amy Campbell and assistant coach Ashley Gill, have made Red Bank Middle School history by guiding their team to victory for the first time. Team Captains, Christina Salinas and Michelle Luna stated, “We learned how to train together, play together, win and lose together and make history together!” The girl’s record for 2019 season ended at 7-3-2. The championship game, held at Union Beach, kept the fans in great suspense, as the game ended in a tie and entered into overtime. In overtime, the first goal for either team automatically ends the game with the scoring team claiming the win, however, with both teams defending their goal like it was the Mona Lisa, this too ended in a tie. It was then that the real suspense began. As the championship game came down to penalty kicks (one player takes a shot from the goal line against the other team’s goalie) emotions were at an all-time high. Scoring for the Middle School and clinching their win were 8th grader Christina Salinas, 8th grader Nashlin Cuellar, and 7th grader Jessie Gomez. Defending her goal and blocking 4 out of 5 shots from Union Beach was 7th grade goalkeeper, Eva Garcia. When asked, “Can you describe the feeling you had when overtime was complete and you knew penalty kicks would begin?” Garcia responded, “My heart dropped. I was thinking this was it. Win or lose it would all come down to me. My teammates lifted me up to build my confidence.” The rest is history!

Red Bank Middle School is not just celebrating the girls’ victory, the boys soccer team also earned first place for the fourth season in a row. Led by head coach, John Adranovitz and assistant coach, Kristen Maiello, the boys held an undefeated record for the 2019 season. Entering their final championship game with a record of 11-0-0, the boys beat out The Ranney School in another nail-biting game held at Count Basie Field. Entering the last two minutes of the game with a tie score of 2-2, the fans were certain this would lead to overtime, but 8th grade captain Carlos Guerra was able to drive the ball past the goalie and hitting the back of the net to push the Red Bank Middle School into the lead. The game ended shortly after earning another trophy for the Red Bank Middle School. Captain and 8th grader Arturo Flores says, “It was extremely memorable to be the captain of an undefeated team and watch our players’ skills grow throughout the season.” Eighth grade starters David Acteopan, Richard Lezama and Carlos Guerra set a record of their own by being the first soccer players to be a part of a first place team for their entire Middle School career. Carlos Guerra also set a new record of scoring 28 goals in one season, while 8th grade goalkeeper Derek Castro only let four balls go past him all season. The record for the boys soccer team in the last four seasons falls at an exceptional 49-2-1.

Both Championship games were held on Wednesday, October 30, at different locations dividing the fans up from supporting their soccer team. Everyone was reunited in excitement as both teams were honored at the Red Bank Borough Board of Education meeting on Tuesday, November 12, and also by Mayor Menna and the Red Bank Borough Council members on Wednesday, November 13. An absolutely positive example of student athletes right here in our own town, Red Bank!