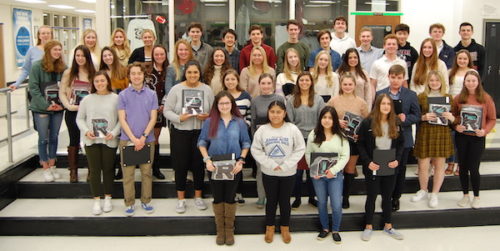 RBR students gathered at the recent awards program, where they were awarded varsity letters for scholarship.

At Red Bank Regional, Varsity Letters are awarded for scholarship as well as athletic achievement.

The Red Bank Regional Board of Education recently honored over 70 students for academic distinction.  The largest number of honorees received an RBR Academic Letter, similar to the Varsity Letter given to student-athletes.

A number of students were recognized for national awards. Nettie Gaeta, Michael Tobin, Samuel Wasserfall, and Aron Wiener have been selected National Merit Commended Scholars. Commended Scholars represent the top 2.5 percent of the 1.5 million students who took the PSAT exam.

The following students received Academic Award Letters for earning straight A’s in all four marking periods in the 2018-2019 school-year.