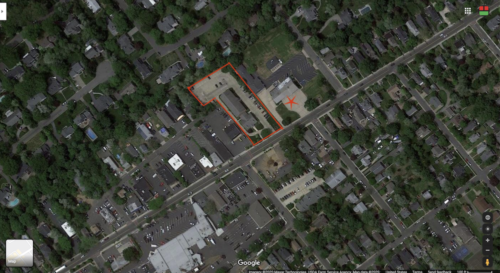 Over the objections of business owners and residents, Fair Haven’s council initiated a plan Monday night to buy a River Road site, where it would create a new borough hall and police station.

Even the council’s two newest members, Democrats whose November election signaled a change in the status quo, agreed that the new facilities are “a need, not a want.” But tenants of the target building said the changes would tear at the fabric of the town. 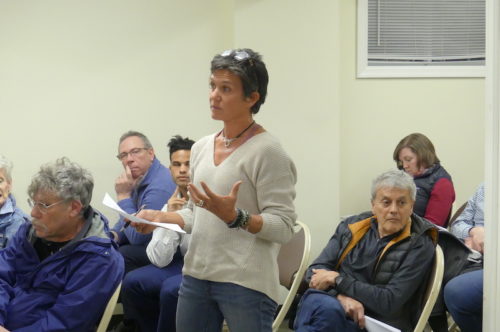 Synergy Hot Yoga owner Jen Portman says there’s no other building in town that can accommodate her business, located at 623 River Road, below. (Photos by John T. Ward. Click to enlarge.)

The plan, first reported by redbankgreen Friday, calls for the town to buy 623 River Road, located next door to the firehouse, for $3.4 million.

There, the borough would either renovate the existing 13,000-square foot office building or erect  a new town hall and police station on the 1.44-acre lot, replacing facilities elsewhere that officials say are inadequate. Mayor Ben Lucarelli said the second scenario is more likely, in his view.

Officials estimate a new structure would cost $13 million, from demolition to furnishings, including property acquisition.

The property is assessed $2.79 million, according to Monmouth County property records, and last changed hands three years ago, for $3 million. Its owner is listed as Reiss Manufacturing, of Rumson.

Monday night’s action by the council introduced an ordinance to authorize the purchase, with a public hearing and adoption vote expected at the March 9 session. Lucarelli said a closing on the deal could take place 60 days after authorization.

According to a financial impact forecast prepared by borough officials, the owner of property assessed at the now-average $842,727 would pay full-year tax increases of between zero and $8.93 over the life of the bond, with the exception of one outlier year, 2026, when the tab would increase by $82.40.

The projections include the anticipated costs of two separate projects: consolidating the existing public works operation onto a smaller portion its current site at Third and Allen streets, and converting the existing borough hall and library  building, at River Road and Fair Haven Road, into a library and community center.

The analysis shows that all the contemplated projects “can be funded with budget neutrality,” she said.

The forecast does not assume cash from the sale of borough land at the DPW and police department/community center sites, though those sales are on the table as possibilities. For every $1 million of net proceeds the borough receives from the sale of land elsewhere, the tax impact decreases by $26 on  the average home, said Casagrande.

Over the course of nearly two hours, residents and business owners pressed the council to slow down, hold a detailed presentation, and reconsider the impacts in terms of community and finances.

Synergy Hot Yoga owner Jen Portman said her 12-year-old business, and its 5,000 members, would be adversely impacted by being displaced from 623 River.

“It’s thriving, it’s a hub of the town,” she said of the building. “Most of us will be forced out of town.

“A small town is judged by the vibrancy of its small business, not on having a 13,000-square-foot monument and Dunkin’ Donuts,” Portman said.

“You have to think about the tenants in that building,” Heather Zappala, owner of Live Well Physical Therapy, also located in the building, told the council. “This is our livelihood.”

The owner of the building came to us. We did not solicit them,” said But Councilman Jim Banahan, who heads the finance committee, said in response to a similar comment that tenants were “missing the larger point.

“The owner of the building came to us. We did not solicit them,” he said. “So your vitriol should be directed to the seller.”

As he has in the past, Lucarelli called the consolidation plan “a need, not a want,” driven largely by decrepit conditions at the police station, which is contaminated with mold.

The building, a former schoolhouse that was converted to police use in the 1970s, “fails 85 percent of the parameters” set up for police facilities by the Department of Justice, and “doesn’t meet building codes,” he said.

Several residents urged the council to consider the impact of a potential shared services policing agreement with a neighboring towns in the future.

Other residents, including Josh Lord, voiced concerns about increasing the borough’s debt load by $15.45 million and its potential impact on future borrowing needs.

Mike McCue, one of two newly elected Democrats who November victory gave the party 3-3 parity with council Republicans for the first time in modern history, said he was initially “skeptical” about the consolidation plan.

“But I did a walk-through at the police department, I saw the black mold,” he said. “I understand it’s not a want. It’s a need.”

But the borough should get more information out to the public “so the town can come around” to the same conclusion, he said.

McCue and fellow first-termer Meghan Chrisner-Keefe were part of the unanimous vote to introduce the measure. The third Democrat, Chris Rodriguez, was absent.

Chrisner-Keefe told redbankgreen Tuesday that “voting yes to introduce an ordinance does not equate to a yes vote in support of an ordinance.”

The borough consolidation plan has “been contemplated for the better part of the past year,” she said. “To reach a decision, we’ve got to get it to a vote.”

Under a plan unveiled in October, 2018, the borough had intended to acquire the vacant former Sunoco gas station property, located directly across River Road from the office building. But that plan blew up just two months later, when developer M&M Realty Partners of Piscataway, which had previously proposed building a drive-thru bank on the site, exercised its option to buy the property for $1.3 million.