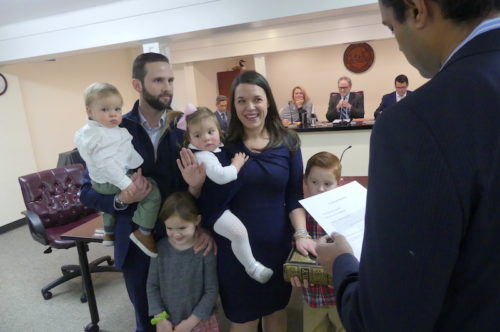 Joined by her husband, James, and four children, Meghan Chrisner-Keefe recited her oath of office. (Photo by John T. Ward. Click to enlarge.)

Democrats pulled even with Republicans on Fair Haven’s council council for the first time in memory Monday night.

But Meg Chrisner-Keefe and Mike McCue, the two newest members of the six-member governing body, both downplayed partisanship in brief interviews with redbankgreen. 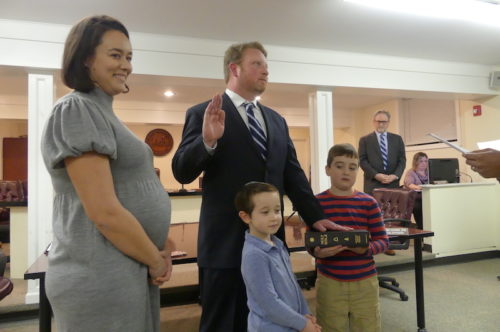 Mike McCue at his swearing-in, joined by his wife, Melissa, and two sons. (Photo by John T. Ward. Click to enlarge.)

With a toddler in her arms reaching out to place a tiny hand on the Bible, Chrisner-Keefe, an attorney, was sworn in by state Senator Vin Gopal. Gopal also swore in McCue, a middle school social studies teacher.

In November’s election, Chrisner-Keefe and McCue defeated Republican Jon Peters, who served 14 years on the council, and Jacquie Rice, who had served one year, by nearly 2-to-1 margins.

McCue and Chrisner-Keefe joined fellow Democrat Chris Rodriguez on the dais, creating a 3-3 split with Republicans Jim Banahan, Betsy Koch and Susan Sorensen, in a town where Republicans have long been the controlling party. As mayor, Ben Lucarelli, a Republican, votes only in the event of a tie.

“I think it reflects a balance that our town is looking for,” Chrisner-Keefe said of the election result as the council prepared to go into executive session following the reorganization meeting. “At the municipal level, party lines are not really as important” as they are in larger governments, she said.

While disagreements are likely, “I’m confident the council will be unified and get work done,” she said.

I think it’s exciting to bring balance to the council,” McCue told redbankgreen. “That’s what local government is all about: balance.”

The council elected Sorensen to serve as council president. Banahan was appointed to Peters’ longtime position as chair of the budget-setting finance committee.

The seats held by Sorensen and Rodriguez will be on the ballot in November’s election.

Posted on January 7, 2020 at 7:00 am, filed under FAIR HAVEN, Featured, Government, Politics and tagged 2019, council, Fair Haven, jacquie rice, jon peters, jonathan peters, Meghan Chrisner-Keefe, mike mccue, nj. Bookmark the permalink. Follow any comments here with the RSS feed for this post. Trackbacks are closed, but you can post a comment. Email this story.
PREVIOUS: SHREWSBURY: CRIMES AND ARRESTS NEXT: RED BANK: TWO QUICK SESSIONS AND A SNAFU