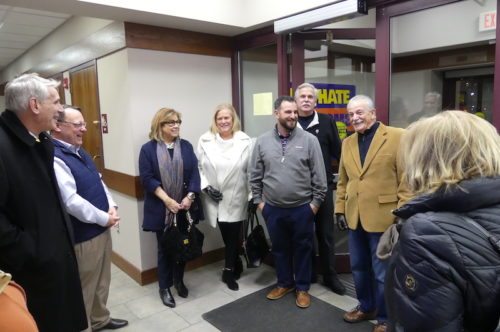 Red Bank officials kicked off the New Year with a snafu Wednesday night.

After racing through back-to-back workshop and regular meetings in record time, the borough council concluded public business – just as two people who’d been told they’d be honored arrived with their families and colleagues.

The faux pas came on a night when the council held two sessions: a 5:30 p.m. workshop to hear department reports, and a regular session, when official actions are taken. Though the two meetings are sometimes held the same night, the regular session normally starts at 6:30.

At the conclusion of the workshop shortly after 6 p.m., Mayor Pasquale Menna joked that council members would have time to get dinner before the start of the regular session.

But as elected officials and audience members headed for the door, Menna called everyone back. He said borough Attorney Greg Cannon had informed him that the published legal notice had said the regular meeting “will be held immediately following” the workshop. Not to do so, apparently, would be a violation of the notice.

So the council moved from the workshop table to the dais and proceeded to zoom through the regular agenda in less than 10 minutes, perhaps a record in brevity.

The meeting adjourned at 6:20 and the council chamber was cleared for a closed-door discussion of personnel and litigation matters — just as former planning board member Guy Maratta and RiverCenter executive director Jim Scavone arrived in the borough hall foyer with their guests.

Both had been told they’d be given proclamations – Maratta’s to recognize his two decades on the planning board, from which he recently retired, and Scavone’s for his leadership at RiverCenter, which he’s leaving this week after six years to take a job at Riverview Medical Center.

Both said they had been told the meeting would begin as usual at 6:30. But because the session had ended, the ceremonies could not take place.

Maratta’s wife, Rose Maratta, said the couple had foregone a birthday party for their twin grandchildren to attend the council event.

Seeing the dozen or so people in the hallway, Menna emerged from the meeting to apologize for the mix-up. He told redbankgreen he was surprised when he learned that regular session wasn’t starting at the regular time, but he didn’t address why the proclamations weren’t on the agenda.

Amid grumbles of “only in Red Bank,” the Maratta and Scavone parties headed across Monmouth Street to Buona Sera restaurant for drinks.