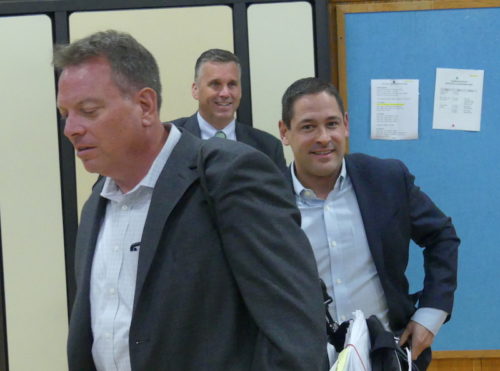 Dunkin’ operator Dominic Sequeira, right, with consultants Karl Pehnke, left, and Robert Freud after the board’s decision. Below, the shopping center owner plans to build a ‘pedestrian refuge’ and crosswalk in the parking lot. (Photos by John T. Ward. Click to enlarge.

The approval followed nearly three and a half hours of testimony about a revised site plan drawn up by consultants for the River Road shopping center where the Dunkin’ would operate.

The aim of the plan, said shopping center attorney Michael Bruno, was to address concerns raised by board members and borough residents about safe movements of cars through the site.

At the same time, however, the plan rejected at least one suggestion made by Betsy Dolan, a traffic engineer hired by the board to review the parking and traffic elements of the application: making the eastern driveway a right-turn-out only exit onto eastbound River Road.

Though she acknowledged that doing so would force some motorists to “recirculate” through the parking lot to the western driveway in order to ext westbound, the change would mean “very little chance ” cars would queue at the eastern driveway, thus making it safer for customers to enter and leave the Dunkin’ on foot, Dolan said.

But Karl Pehnke, a traffic engineer for the shopping center, argued that customers of the center have been making left turns from the eastern driveway for decades, and would continue to do so, no matter what signage was posted telling them not to.

“The driveway works, and the queues we’re seeing are at most one, two-car queues,” he said. “So we believe it’s appropriate.”

Though the applicant was amenable to making other changes, such as making the eastern driveway an exit, Bruno was steadfast that the center was sticking with the plan to allow exiting traffic to turn both east and west.

Bruno agreed to move a proposed pedestrian island to allow for two exiting vehicles to queue without impinging on the crosswalk; to extend a propose sidewalk railing; and to paint asphalt with markings to stop customers from parking directly in front of the Dunkin’ shop.

But board chairman Todd Lehder, who along with Councilwoman Betsy Koch cast a ‘no’ vote, cited the driveway exit issue as key to his opposition.

“I think the right-turn-only is the right way to do this,” he said, “getting cars out of there and not letting cars stack.”

Other board members, though, said they found the “recirculation” that would be forced by that plan to be more problematic.

Koch said the center “had an opportunity” to do more for pedestrian safety within the site, but “hasn’t done enough.”

Prior to the vote, Grange Avenue resident Tracey Cole said the proposal was at odds with the objectives of the borough’s Active Transportation Plan.

The Dunkin’ proposal had sparked such passion on a community Facebook page that the administrator shut down comments on the matter earlier this year, citing too many “nasty” posts.

But with the Knollwood School gymnasium less than half-full Monday night and the meeting closing in on its fourth hour, only a handful of other residents spoke during the public comment session.

One, Mike Nitka, of Battin Road, lamented that the board was “missing an entire discourse about bicycles,” focusing exclusively on automobiles in a town where children are raised to value transportation by bike.

Third Street resident Mike Wiehl expressed frustration on behalf of the applicant, whom he noted was trying to open a shop that this is a permitted use in the zone.

“I’m a little disgusted with this whole process, the way the residents have reacted, trying to bubble up the town,” he said. “If a business wants to come in and they’re allowed, and they’re going to be successful, they should not be held to a different standard.”

The shop would be operated by Dominic Sequeira, of Lincroft, who with family members also owns Dunkin’ shops in Red Bank, Tinton Falls and Lincroft. Sequeira told redbankgreen afterward that he expects several months to pass before the business can open.