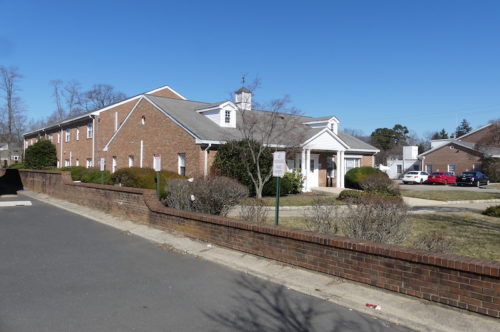 The borough plans to buy and raze the office building at 623 River Road, the mayor says. (Photo by John T. Ward. Click to enlarge.)

After getting derailed last year, Fair Haven’s ambitious plan to consolidate borough facilities in new locations are expected to get back on track Monday night.

The town now plans to acquire and demolish the office building at 623 River Road and replace it with a new borough hall and police station, Mayor Ben Lucarelli told redbankgreen Friday morning. 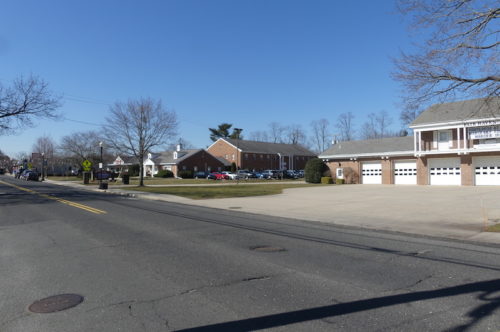 The building, at center, is next door to the Fair Haven Volunteer Fire Company property. (Photo by John T. Ward. Click to enlarge.)

Under a negotiated deal, the borough will pay $3.4 million for the building and 1.44-acre lot, according to borough Administrator Theresa Casagrande.

The property is assessed $2.79 million, according to Monmouth County property records. Its owner is listed as Reiss Manufacturing, of Rumson. Lucarelli declined to say which party initiated the negotiations.

The borough council is scheduled to introduce an ordinance allowing for the deal at its regular meeting Monday night. (Here’s the agenda, which includes the ordinance, 2020-02.)

While he expects questions from the public, “we really won’t be talking about it much Monday,” Lucarelli said. “It’s really just to introduce the ordinance.”

Ordinances typically go up for final adoption votes at the meeting following the one at which they’re introduced – which in this case would be March 9.

The target site is located between the borough firehouse and the Krauszer’s convenience store, and includes offices and Synergy Hot Yoga among its tenants.

Lucarelli said planning consultants to the borough “agree that having our borough facilities adjacent to the fire company is ‘best practices’ as far as planning goes.”

Because of its “residential style” wood frame construction, the 13,500-square-foot building is not suitable for municipal purposes, Lucarelli said. While it could be retrofitted, at a cost of about $600,000, he said bonding options for an all-new facility would allow the borough to amortize costs over 30 years, rather than 10-years under a rehab approach, he said.

[Clarification: Casagrande told redbankgreen following publication of the original version of this post that the building “could potentially be retrofitted” for about $600,000 less than the cost of a new structure. That’s based on a “very preliminary” estimate that rehabbing would cost about $50 per square foot less than new construction, she wrote by email. Cost estimates for either approach will depend on the size and design of the building and won’t be done “unless the Borough purchases the property,” she wrote by email.

In addition, she said: “Should the property purchase become final, the Borough’s Governing Body has yet to make a decision on whether to build new or retrofit the building. That decision will be made after our Architect and Engineering professionals perform a detailed comparison of both options (new and retrofit) that will include pros, cons, and costs for each option.”]

Under a plan unveiled in October, 2018, the borough aimed to acquire the vacant former Sunoco gas station property, located directly across River Road from the office building, on which it hoped to build a new police station and borough hall.

But just two months later, developer M&M Realty Partners of Piscataway, which had previously proposed building a drive-thru bank on the site, exercised its option to buy the property for $1.3 million, according to Monmouth County records.

M&M also signaled its intention to develop the site with a mix of residential and commercial uses.

Under the terms of a recent settlement between the borough and the Fair Share Housing Center over the town’s affordable housing obligations, M&M would be permitted to build up to 14 apartments on the gas station site, two of them set aside for low- and moderate-income tenants, atop ground-floor commercial uses in a building up to 38 feet tall.

Meantime, the council is moving toward solicitation of bids to build the new DPW operation on Third Street, which would leave the borough with a swath of adjoining, developable property, Lucarelli told redbankgreen in mid-January.