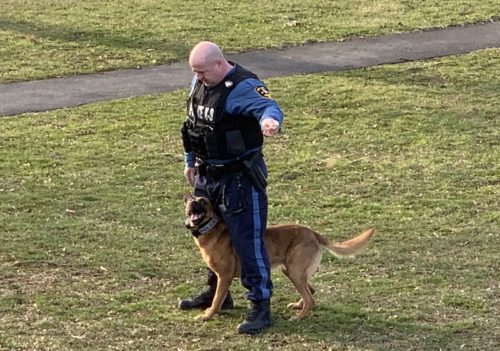 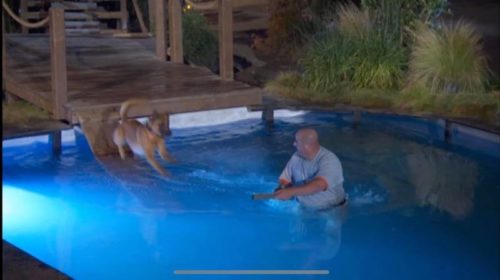 Balmer and Hunter in the “splashdown” part of the competition. (Photo by A&E. Click to enlarge.)

Patrolman Stan Balmer and K9 partner Hunter are scheduled to appear on the eighth  episode of the first-season program on Wednesday at 9 p.m.

Hunter, the first of the police department’s two crimefighting canines, joined the squad in March, 2015. The other is Eko (pronounced ‘echo’), who came on board two years later and is handled by Patrolman Tanner Shea. Both dogs are of the Belgian Malinois breed.

The hourlong show pits four police K9 teams and one civilian pair in three rounds of competition that test their speed, agility, scenting ability and teamwork.

The aim is to complete a series of challenging tasks on “one of the biggest and toughest K9 obstacle courses ever assembled,” according to A&E. “Teams will navigate a complex maze to locate scented items and apprehend a suspect in a bite suit with a takedown, among a variety of other challenges.”

One part of the challenge is a literal maze: a 3,000-square-foot structure of small rooms in which five scents are hidden for the dogs to sniff out. The competition also requires dogs to traverse a rope bridge, climb a fire escape and swim a 46-foot-long splashdown pool to the finish.

Each week’s winning team gets $10,000 and an additional $5,000 to donate to the animal charity of their choice. In the final week of competition, top competitors will return to the finale course to battle for the title of “America’s Top Dog” and an additional $25,000 cash prize.

Like Eko, Hunter makes regular appearances at local schools and at “National Night Out’ in August to demonstrate his work. He also has  his own Facebook page.