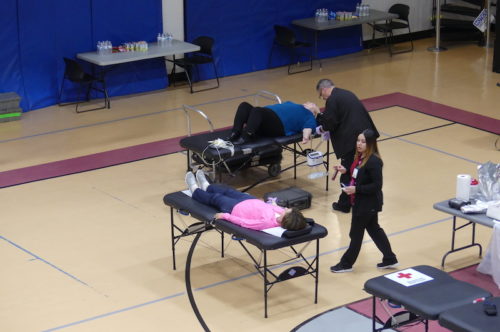 With blood supplies running low because of the pandemic’s impact on regular drives, about 50 people made appointments for well-spaced donations at Red Bank’s YMCA Thursday. (Photo by John T. Ward. Click to enlarge.)

The number of state residents who have tested positive for the coronavirus soared to 6,876, an increase of 2,492 from Wednesday, Governor Phil Murphy said in his daily briefing. 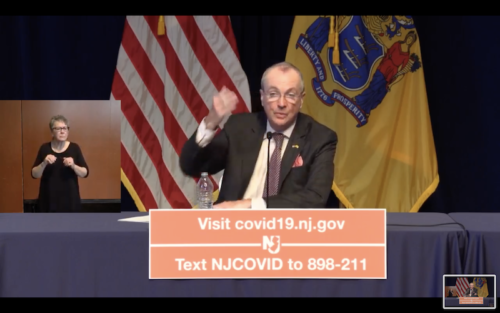 The caseload growth, which more than tripled the 736 new cases recorded Wednesday, is “partly due to” the opening of mass-testing drive-through sites at the PNC Arts Center in Holmdel and a college in Bergen County, Murphy said.

Included in the caseload are 436 new COVID-19 positives detected via tests at those sites, he said.

The death toll associated with the pandemic rose to 81 victims, Murphy said.

Health Commissioner Judith Persichilli said two of the latest deaths occurred in Monmouth County, where the caseload rose by 179, to 501. Specific locations were not disclosed.

“We continue to see older people and people with underlying conditions to be more severely impacted,” Health Commissioner Judith Persichilli said. Three of the latest deaths were “associated with” long-term care facilities, she said.

Of the state’s 375 long-term care facilities, 43 have at least one resident who has tested positive. In Woodbridge, St. Joseph’s Senior Home has seen three deaths, with 24 residents and 5 staffers testing positive, Persichilli said.

In the last 24 hours, the percentage of positive tests versus all tests climbed again, to 31.7 percent, Persichilli said. On Wednesday, she said it was 29 percent.

• Speaking at the Trenton War Memorial, Murphy said both the PNC and Bergen County Community College drive-thru testing sites will be open Saturday only to symptomatic healthcare providers and first responders,”people who are laying it on the line.” The general public will not be admitted to those sites for the day, he said.

Starting Sunday, the two sites will have new operating hours to boost the number of daily tests to 500 each, up from about 350 per site at present, he said. Details will be posted at the state’s COVID-19 online information portal.

• Murphy sought to quash talk about a possible near-term reopening of schools, which are closed as per his order.

The decision about when to reopen schools “rests with yours truly,” he said.”And we won’t revisit the decision until April 17, at the earliest.”

“We will not do this piecemeal. We will do this together,” he said.

• Earlier in the day, President Trump issued a Major Disaster Declaration for New Jersey. The declaration will provide federal assistance to supplement statewide recovery efforts, including the provision of individual crisis counseling.