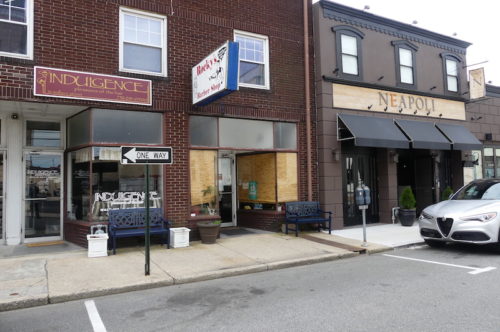 A Red Bank barber shop that had continued operating after a state-ordered shutdown of personal care businesses closed after a visit from borough police Saturday morning.

Police Chief Darren McConnell said officers went to Rocky’s Barber Shop on Wallace Street on a complaint that it was defying a statewide anti-COVID-19 order. They found it open, with three or four people inside, “but nobody actively cutting hair,” he said.

“We advised them of the order and need to comply, which they have,” McConnell told redbankgreen.

On Thursday, as part of a broader campaign to stop the spread of the COVID-19 virus, Governor Phil Murphy ordered the immediate closure of all New Jersey personal care businesses “that, by their very nature, result in noncompliance with social distancing guidelines.”

The order, which expanded on one that shut down gyms, theaters and other establishments, applies to hair salons, nail salons, tattoo parlors and more.

A sign taped to the front door at Rocky’s advised customers who still wanted haircuts to call and “we will figure something out.”