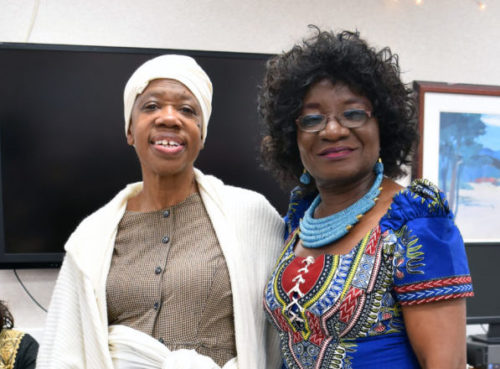 A resident of Eatontown, Ms. Stone brought Tubman, born in Maryland around 1820, to life. Donning clothing typical of a 19th century slave, she recalled not only the major events of Tubman’s life, but her feelings, social attitudes, and the legal and political forces.

Despite great odds, including abuse, forced labor, and a traumatic head injury, Tubman risked her life in pursuit of equality and social justice. After escaping to her own freedom in 1849, she focused on liberating others. Ms. Stone reminded the audience that Tubman joined the Union Army during the Civil War and is recognized as the first woman to lead an armed expedition.

Twitter
Posted on March 4, 2020 at 6:19 pm, filed under All Good, Charity, RED BANK and tagged black history month, nj, red bank, United Methodist Communities (UMC) at The Wesleyan. Bookmark the permalink. Follow any comments here with the RSS feed for this post. Trackbacks are closed, but you can post a comment. Email this story.
PREVIOUS: FAIR HAVEN: FACILITIES PLAN AIRING SLATED NEXT: LITTLE SILVER: BUSY MONTH FOR RBR’S VPA
redbankgreen.com