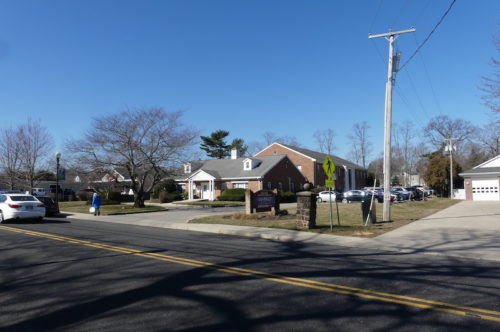 With little more than a day’s notice, Fair Haven has announced a public presentation over a proposed plan for a new borough hall and police station.

One council member called the alert “terribly short notice” and asked that a key vote on the proposal be tabled.

A posting on the borough website early Wednesday afternoon said Mayor Ben Lucarelli will hold a “special public open forum, as a question and answer session” on the topic of borough facilities Thursday night (details below).

In addition, police Chief Joe McGovern will host open-house tours of the current police station Saturday, according to the announcement.

That facility, according to Lucarelli and other borough officials, is outdated and inadequate by federal standards. It’s also got a persistent mold problem, they have said.

Under a controversial plan first reported by redbankgreen last month, borough officials are looking to acquire the tenanted office building at 623 River Road for $3.4 million.

There, the existing 13,000-square foot office building, located next door to the volunteer firehouse, would either be razed or retrofitted to house a new police station and borough hall on the 1.44-acre lot, under the proposal.

Officials estimate a new structure would cost an an additional $9.6 million above the purchase price, from demolition to furnishings.

At its most recent session on February 24, the council introduced an ordinance authorizing the property acquisition, amid calls from some residents for a fuller airing of the proposal. An up-or-down vote on the measure was scheduled for March 9.

Lucarelli did not immediately respond to a redbankgreen inquiry about the short-notice timing of the forum.

“While I support all opportunities for public input, this is terribly short notice,” she told redbankgreen by text. “A better approach would be to table the vote on this agenda item until a future meeting and schedule a public forum in the interim with proper notice. Fair Haven’s residents deserve to be heard on the potential acquisition of property and the future of our town.”

Lucarelli has called the facilities plan “a need, not a want,” driven largely by decrepit conditions at the police station. Councilman Mike McCue, also in his first year, echoed that assessment February 24.

The ambitious plan also calls for consolidating the existing public works operation onto a smaller portion its current site at Third and Allen streets, and converting the existing borough hall and library building, at River Road and Fair Haven Road, into a library and community center.

Here are relevant documents that borough officials have cited in discussing the plan and its anticipated financial impacts:

The forum is scheduled for 7:30 p.m. Thursday at Bicentennial Hall, located at 25 Cedar Avenue.