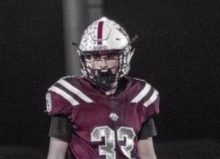 The award is named after long time Rotarian and one of the founders of the Vince Lombardi Awards after he passed away. The award is presented to a Monmouth County high school football player who has persevered and made real contributions to his team while not expecting anything in return.

Dal Pra was supposed to receive the award last week at the Vince Lombardi awards, but the coronavirus pandemic changed all plans. It’s unclear when the presentation will take place, although the Monmouth County Rotarians already announced him as the 2020 winner.

Red Bank Regional’s head coach, Dave Schuman nominated Dal Pra and says, “I have been coaching for 17 years, and it is the first time that I had a tough, gritty, smart leader of the team, who was also the ultimate team player. Will was also one that truly takes the time to make sure every single member of the team feels a part of the team. He cares for every one of his teammates and was willing to help the team in any way he could.”

This past fall the BUCS went 7-4 and had a top-ten Shore Conference defense. Dal Pra was one of the Shore Conference’s top tacklers and led the BUCS with 88 tackles. He also tied for his team lead in sacks with four and tackles for a loss with twelve with fellow Linebacker Owen Laughlin.

Will was then named 1st Team All-Liberty Division and 2nd Team All-2 River Area.
Will and Owen were also named Co-Defensive Players of the year for the BUCS.

Dal Pra currently holds a 3.9 GPA and will attend Florida State University in the fall and major in Business.