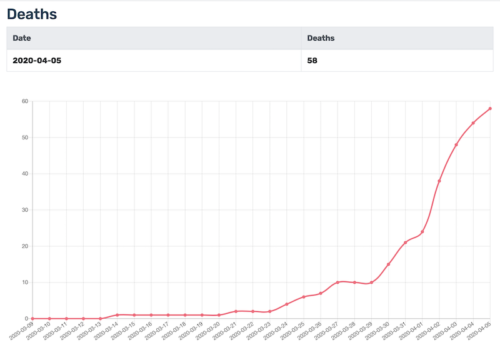 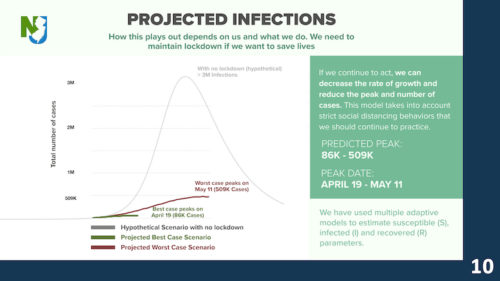 The red line in the above graph show’s New Jersey projected caseload if current social distancing were to stop, Murphy said on Twitter, adding, “if we continue to stay home and practice social distancing, we can stick ourselves to the bottom curve.” (New Jersey Health Department graphic. Click to enlarge.)

The state’s death toll in the pandemic grew by 86 since Sunday’s administration update, to 1,003. That compared to 71 new deaths reported Sunday and a pandemic-high of 200 disclosed Saturday.

For the second day in a row, Monmouth County accounted for four deaths, down from 16 in the two preceding days. Sixty-two deaths in the county have been fully or in part attributed to the coronavirus, the state reported on its COVID-19 web page.

Another 3,663 state residents tested positive for the virus since Saturday, bringing the total to 41,090, the report said.

Speaking at his six-day-a-week briefing, Murphy said compliance with his executive “stay home” order of March 21 is having the intended effect OF weakening an anticipated surge of illnesses.

But those behaviors must continue in order to avert a “disaster,” he said.

“The curve is flattening,” Murphy said, “but we still have a week go go before we hit the peak.” Relaxing observation of social-distancing before then could lead to an “onslaught” of cases into hospitals, he said.

“What you’re doing is making a difference,” he said, addressing state residents. “But if we don’t keep doing what we’re doing… we’ll be overwhelmed with a tsunami.”

Fifteen of the latest deaths occurred in longterm care facilities, which have been particularly hard hit in the crisis, said state Health Commissioner Judith Persichilli. Seventy-seven percent of infected patients have been above the age of 65, and 60 percent were male.

• State Police Superintendent Colonel Pat Callahan called out an incident in Rumson Saturday night, when police dispersed a yard concert of Pink Floyd tunes and were reportedly greeted with insults from some of the 30 or so adults in attendance.

“Despite the fact that police were on scene with flashing lights attempting to disperse the crowd, the band continued playing,” state Attorney General Gurbir Grewal said in an announcement Sunday night. “It was not until a Rumson officer directly approached Maldjian that he stopped singing and playing. Maldjian then told his Facebook Live audience (he was streaming his performance) that he had to stop playing.”

According to a post on the borough police department’s Facebook page, “when we informed everyone that they must leave–in accordance with Governor Murphy’s executive orders regarding these so called ‘corona-parties’ –we were met with well wishes of ‘F-the police’ and ‘Welcome to Nazi Germany’ from this group of ’40-50 year old ADULTS.'” The post has generated hundreds of online comments.

“Charges related to those disorderly ‘audience’ members are forthcoming,” state Grewal said in the announcement.

Callahan said people engaged in such behavior should consider that their actions “may lead to somebody not getting a ventilator.”

Murphy called the purported treatment of the police at the event “vile and so unacceptable.”

“For all the jackasses out there and all the knuckleheads, get with the program,” Murphy said.

Maldjian, an intellectual property attorney in Tinton Falls, did not respond to redbankgreen‘s attempts to reach him for comment.

[UPDATE 1: In an interview with the Asbury Park Press, Maldjian’s attorney, Mitch Ansell, said Maldjian intended to host a “stay-at-home” porch concert on Facebook Live, and did not realize a crowd had assembled in the darkness outside his home. He also “has absolutely no knowledge of the horrible and vulgar things that people allegedly said to the police,” Ansell said.] [UPDATE 2: Grewal’s office announced Ryan Sheftel, 46 of Rumson, was charged Sunday night with disorderly conduct and disturbing the peace in connection with the “party and concert.”

“When officers ordered the partygoers to disperse, Sheftel allegedly cursed at the police and shouted “Welcome to Nazi Germany,” the announcement said.]