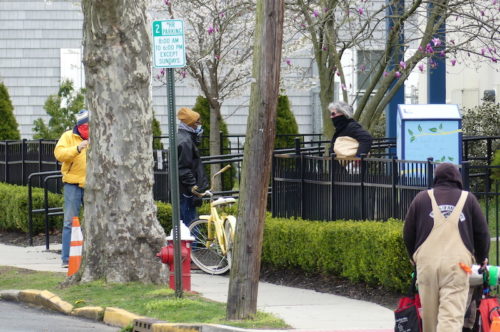 Mask-wearers lined up for free meals at Lunch Break in Red Bank Friday. Murphy singled out Lunch Break for praise in the crisis. (Photo by John T. Ward. Click to enlarge.)

Governor Phil Murphy paused for a moment of silence Saturday after announcing another 200 New Jersey deaths from the COVID-19 pandemic. The state’s death toll in the pandemic rose to 846, or 100 more than the number of residents killed in the September 11, 2001 terrorist attacks, Murphy said.

“Please let that sink in,” Murphy said at his daily briefing on the crisis. “This pandemic is writing one of the greatest tragedies in our state’s history.”

The increases do not necessarily indicate a one-day death toll, and may include some from recent days just being accounted for, Murphy said.

Another 4,331 state residents tested positive for the virus since his Friday briefing, Murphy said, driving the total to 34,124.

Of the new cases, 301 were in Monmouth County, with 2,065 county residents now having tested positive.

State Health Commissioner Judith Persichilli said 35 percent of those who have died were known to have had underlying health conditions that did or may have contributed to their deaths, with 542 others under investigation. “Only four” victims did not have contributory conditions, she said.

Forty-six percent of those who have died were 80 years old or older, and another 32 percent were between the ages of 65 and 79, she said.

• “Everyone can do their part to slow the spread of the virus” by wearing a simple cloth mouth and nose covering, Persichilli said, referring to the Centers for Disease Control and Prevention recommendation of Friday.

The CDC advises that people wear cloth face coverings in public settings where other social distancing measures are difficult to maintain, such as grocery stores and pharmacies.

The coverings can help slow transmission of the virus from people with coronavirus who lack symptoms, the CDC says.

But “wearing a simple cloth face covering when you are out is not in any way a replacement for social distancing to flatten the curve” of the anticipated caseload surge, Persichilli said.

Murphy said he plans to begin wearing a covering, albeit not at his six-day-a-week briefings.

• Nine northern New Jersey hospitals were on patient-divert status Friday night, three for critical-care patients only and six on “full divert, primarily due to staffing issues,” Persichilli said, repeating a call for volunteers with qualified medical training and experience.

• Among the volunteers Murphy cited was Gwen Love, executive director of Red Bank’s Lunch Break food bank on Drs. James Parker Boulevard, and her team for  “keeping the doors there open and serving the needs” of those who are hungry, he said.