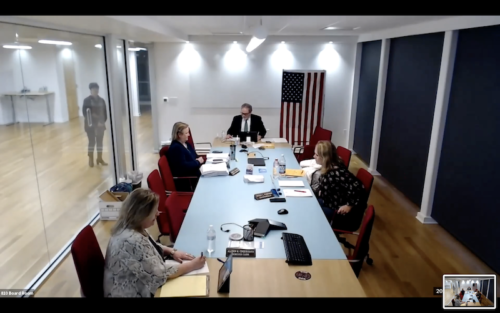 Thanks to a videocamera placed on a conference room table, Fair Haven residents got a close-up view of Mayor Ben Lucarelli’s beard when the town’s governing body held its first-ever online-only public session two weeks ago.

Now, thanks to the limits on public gatherings in the COVID-19 pandemic, Red Bank is also about to enter the fuzzy world of public sessions at which no members of the public are present. 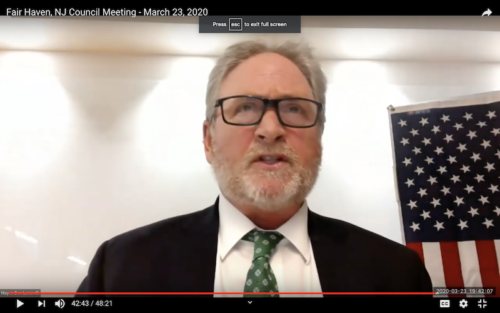 FAIR HAVEN
Once again, the mayor and council will hold a virtual public session Monday at 7 p.m., this time from borough hall (the first one was from the offices of Forefront Incorporated). Access information can be found here.

At its abbreviated March 10 session, the council tabled a hot-potato agenda item: the proposed $3.4 million purchase of property for a new borough hall and police station. No action will be taken on the proposed property acquisition until “the threat of the coronavirus is no longer a concern,” the borough’s announcement said.

Little Silver’s mayor and council will again forego the usual workshop session and hold a regular public meeting via Zoom at 7 p.m., an hour earlier than usual. Instructions are here.
Here’s the agenda.

Moved up by one night from its usual Wednesday slot in respect for Passover, the mayor and council will hold their first-ever virtual meeting Tuesday at 6:30 p.m., following cancellations of workshop and regular sessions last month.
On the agenda: a slate of financial matters and the hiring of a police officer.
The session will be carried live on Zoom, with the public able to watch and listen (or listen only) via internet-accessible devices or telephone. “Those attending from the public will be muted during the meeting, except for the time set aside for Public Comment, at which time they will be unmuted,” according to access instructions on the borough website.
Also:
Members of the public are asked to make comments, statements or ask questions prior to the meeting to the Borough Clerk by e-mail to pborghi@redbanknj.org or telephone 732-530-2740.
These are unprecedented times and they require unprecedented solutions.  We appreciate your patience as we endeavor to utilize this new technological option and hope you understand in the event there are unforeseen technical issues.  After the meeting has concluded, a recording will be made available to the public on the Borough website at www.redbanknj.org
Mayor Pasquale Menna, who is recovering at home from COVID-19-like symptoms, tells redbankgreen that he plans to preside over the session as usual. A week ago, Menna said his doctor had ordered him to self-isolate at home for two weeks of recuperation.

And what about the planning and zoning boards, which haven’t met for more than a month? Borough Business Administrator Ziad Shehady notes that those meetings are trickier, in part because of their heavy reliance on visual exhibits.

From a Shehady email to redbankgreen Monday:
Land use boards are quasi-judicial, requiring testimony and more specific considerations. We’ve been told in a number of areas that the State is putting out guidance for municipalities on various operations that need to be continued. I’d prefer to move cautiously and deliberately rather than jump the gun so that we are doing things correctly, legally and with the advice of the State. It was just the end of last week that the State published guidance for Land Use Boards so we will be reviewing that with the Board attorney(s) and Chairs and acting accordingly.  I expect in the next week or two we’ll be announcing the plan/info for the Planning & Zoning boards.
Posted on April 6, 2020 at 11:15 am, filed under Children & Teens, COVID-19 Pandemic 2020, Education, Featured, Government, Health, LITTLE SILVER, Monmouth County government, RED BANK, Schools, SHREWSBURY and tagged ben lucarelli, coronavirus, council, covid-19, Fair Haven, little silver, monmouth county, nj, planning board, public meetings, red bank, ziad shehady, zoning board, zoom. Bookmark the permalink. Follow any comments here with the RSS feed for this post. Trackbacks are closed, but you can post a comment. Email this story.
PREVIOUS: RED BANK: LIFE BECOMES A MASK-ERADE NEXT: VIRUS UPDATE: COUNTY DEATH TOLL EASES