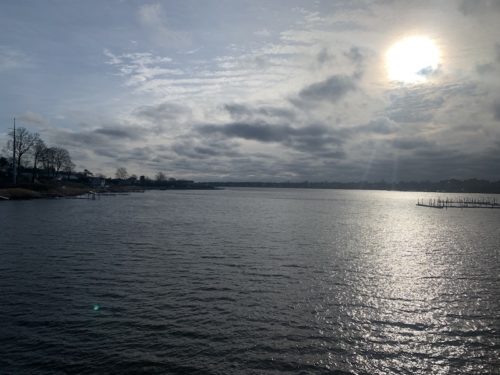 A new month begins with a lovely sunrise over our beautiful Navesink River, as seen from the Route 35 bridge Wednesday morning. (Click to enlarge.)

With COVID-19-related death and infection rates rising faster than ever, “we’re beginning to feel the real strain on the critical care” segment of the healthcare system in the northern part of New Jersey, state Health Commissioner Judith Persichilli said Wednesday. 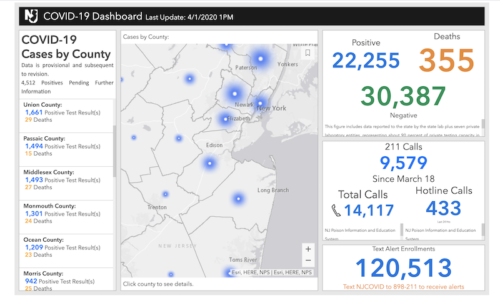 A screengrab from the state’s COVID-19 dashboard Wednesday afternoon. (Click to enlarge.)

Ninety-one more state residents had died since Tuesday, Governor Phil Murphy said at his daily press briefing on the crisis. In all, 355 New Jersey residents have died, with three previously reported deaths removed from the tally for further investigation, he said.

Monmouth County’s death toll in the pandemic stood at 24 Wednesday, according to the state Health Department website. On Tuesday, the county government reported 13 had died, and an update of its total, which appears to lag the state figure, was not immediately available.

A backlog of pickups by mortuaries has officials “concerned” about morgue capacity at some upstate hospitals and “working to secure refrigerated trucks if we need them,” Persichilli acknowledged in response to a reporter’s question.

Statewide, 3,649 new coronavirus-positive cases were recorded, the largest one-day jump so far, as the state nears an expected “surge” over the next two weeks.

Also Wednesday, the Monmouth freeholders reported 13 COVID-19-positive patients in Fair Haven, up one from Tuesday; 17 in Little Silver, up two; and 27 Red Bank, up five. The county put the number of confirmed cases at 1,307.

The Murphy administration’s plan to absorb the anticipated surge in illnesses calls for doubling the number of intensive care beds, boosting the number of other hospital beds and bringing in thousands of ventilators and pieces of personal protective equipment, its officials have said.

With the caseload expected to double every six days, existing hospitals and others planned for temporary roll-out are short of critical ventilators by 1,650 machines, officials said. Murphy said the state is trying to get them from the federal government.

Meantime, “it looks like the surge is beginning to occur in the northern part of the state,” where Persichilli said seven hospitals were on patient-divert status for some portion of Tuesday due to capacity concerns.

“Two hospitals requested additional ventilators, and we were able to support those needs,” she said.

• Murphy and legislative leaders agree to push back tax filing deadline to July 15.  Income-earners need not file for an extension.