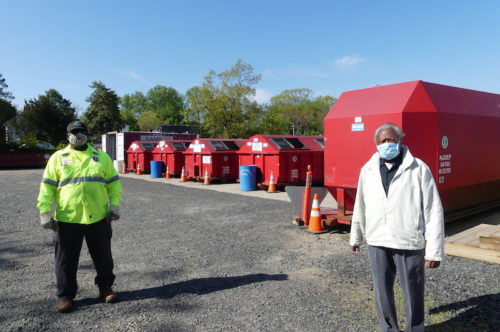 Things got personal. During the governing body’s semimonthly meeting, conducted via Zoom, Councilman Ed Zipprich accused Business Administrator Ziad Shehady of retaliation for an earlier action by the union that represents the affected employees. 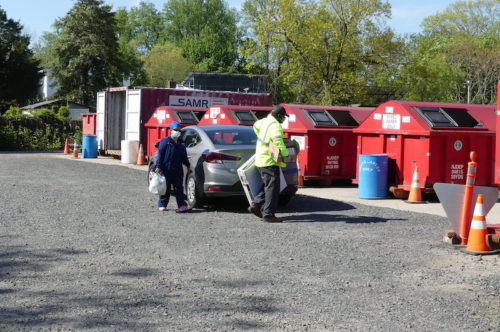 At issue was a resolution to eliminate the two jobs as part of a reorganization of the recycling center, including a reduction in hours of operation.

The positions cost the borough about $70,000 per year, Shehady told redbankgreen.

Kevin Tauro, shop steward for Communications Workers of America 1025, which represents blue-collar employees, called the action “so inconsiderate and ridiculous, given this healthcare crisis.”

Zipprich moved to table the resolution, and was seconded by Councilman Michael Ballard, who heads the finance committee. But they found themselves on the short end of two 4-2 votes: to table, and to adopt the ordinance.

Zipprich, who serves as council liaison to the public utilities department, said the department “has been the constant recipient” of job cuts, with staffing down from 46 in 2004 to 30 at present, and 28 with the two latest cuts.

He said the cuts “put further strain on an already reduced staff” that’s been working hard to keep streets and public facilities safe and clean during the COVID-19 pandemic.

Zipprich also said Shehady had added the item to the agenda “without even the courtesy of a reply to any of my emails, especially after adding to his own staff.”

“It is my opinion that it is a retaliatory act on the part of the borough administrator to slight the unions because of their earlier grievances,” he said.

“We are not going to balance the budget by firing these two employees,” he said.

Shehady did not address the comments during the meeting, but emailed the following comment in response to a redbankgreen request Thursday:

It’s shameful and unprofessional to publicly attack any Borough employee.  Making such false allegations is a disservice to the residents because it puts the Borough in a legally precarious position. The majority vote by the Council, which should be respected, demonstrates that there was no retaliatory action on my part. The vote last night was the culmination of changes endorsed by the governing body in 2019.  In 2018, Government Strategy Group recommended in their Management Enhancement Review that we “perform periodic in-depth departmental studies addressing manpower and operating efficiency for the largest departments. Red Bank’s are Police and Public Utilities.”  The Director of Public Utilities and I have followed this suggestion and presented operational efficiency recommendations to the Council in 2019 in Executive Session – the facts, documents, and evidence make it clear these allegations are unfounded.  I’m reminded of Democratic Senator Daniel Moynihan’s quote, “Everyone is entitled to his own opinion, but not his own facts.”

A 2018 Management Enhancement Report based on a review of borough operations recommended that officials “investigate contracting functions in the Department of Public Utilities such as grounds maintenance, building maintenance, etc. This could lead to reduction in full-time equivalent staffing and lower operating costs.”

Ballard, who heads the budget-setting finance committee, called it “a sad day.

“I’ve been looking at the budget, and there’s plenty to be cut. There’s a ton to be cut,” he said. “It does not necessarily have to be our lowest-paid, minority, part employees.”

Whatever savings might be found by eliminating the recycling posts would be “quickly blown away” by replacing retiring police officers and other spending, Ballard said.

Pushing back against Zipprich and Ballard, other council members cited the report, and said the cuts had been in the works long before the COVID-19 crisis hit.

“This has nothing to do with” the individual employees, said Councilman Erik Yngstrom. “It’s about the positions,” he said, which have been “up in the air” since 2018.

Yngstrom said the CWA “wouldn’t negotiate” a reduction in hours, “so the union has fault in this, too.”

Councilwoman Kate Triggiano said the cuts had been agreed to by public utilities Director Cliff Keen, adding, “I support our department heads.” And Councilwoman Kathy Horgan said officials “need to be looking at cost-cutting.”

A notice announcing new hours of operation posted on the borough website late Thursday morning said a review of usage found that, “in light of curbside recycling service being offered twice per month to all residents and the increased cost of recycling processing costs, it was wasteful to offer additional hours of operation when usage was not in demand.”

At the West Sunset Avenue recycling center Thursday morning, Greene and Caine told redbankgreen that they help residents, including many elderly women, unload their vehicles and put their paper, metal and electronics in the appropriate storage bins.

They also, they said, keep the yard clean and rodent-free.

“You don’t see paper all over the place,” said Caine. With reduced hours of operation, people will leave trash outside the yard or throw it over the fence, “and it will infest with rodents” from the nearby Swimming River, he said.

Despite his age, Caine – who was hired by the borough as a garbage collector in 1965, joined the police department five years later and retired as a sergeant in 1994 – said he wants to continue working, both for the the income and to stay active.