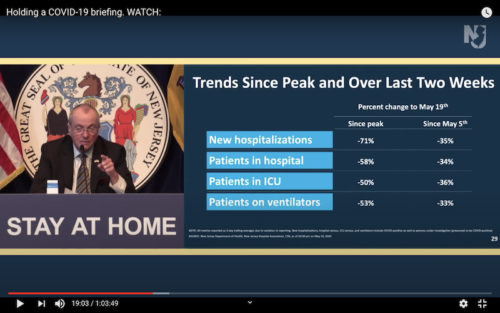 Key measures of the COVID-19 pandemic have fallen to half their peak levels, but New Jersey residents are still being hospitalized in large numbers, Governor Phil Murphy said Wednesday.

“Everything we’re watching has gone in the direction we’ve wanted,” Murphy said at his daily press briefing on the crisis.”

Across the board, the key numbers are down by half, or in some cases way more than half, from the peak,” Murphy said.

Those metrics all concern hospitals: the numbers of patients in beds, in intensive or critical care, and on ventilators.

But at the same time, relative to other states, there’s cause for concern, Murphy said. He said 39 of every 100,000 New Jersey residents are in the hospital with the disease, by far the most in the United States.

In addition, new hospitalizations of patients with COVID-19 continue at a rate of roughly 200 per day, he said.

“If you want to point to a data point that says we’re not out of the woods yet, it’s that one,” he said.

The latest data show 10,747 resident have died in the pandemic, an increase of 161 from Tuesday.

The fatalities include 531 Monmouth County residents, an increase of 11.

Here are the latest statewide pandemic figures, according to the state Health Department’s COVID-19 dashboard:

Patients in intensive/critical care: 969, down 8

• State Health Commissioner Judy Persichilli reported that New Jersey now has had 15 cases of multisystem inflammatory syndrome in children, up 3 from Tuesday, with patients ranging in age from 2 to 18 years old.

Eleven have tested positive for COVID-19, 4 remain hospitalized and no patients have died, she said.

• The state also reported on COVID-19 cases and deaths by individual longterm care facility for the first time.

At the Hackensack Meridian Health facility on Chapin Avenue in Red Bank, all 13 confirmed deaths have been of residents, and no staff members, according to the report.

The facility has had 66 residents fall ill to the pandemic, and 6 staff members, the report said.

The Atrium at Navesink Harbor on Riverside Avenue has seen no resident or staff deaths in its longterm care arm.

Separately, a spokeswoman for Atrium owner Springpoint Senior Living said she did not immediately have access to comparable figures for the building’s independent living arm, where 4 deaths were previously reported.