Customers dining in the sidewalk seating area of Robinson Ale House on Broad Street in 2018. (Photo by John T. Ward. Click to enlarge.)

Red Bank officials have formed a committee to “creatively expand outdoor capacity for restaurants and retail sales” as the town embarks on a post-COVID-19 recovery.

One idea the committee is expected to chew over: use of public spaces for outdoor dining. 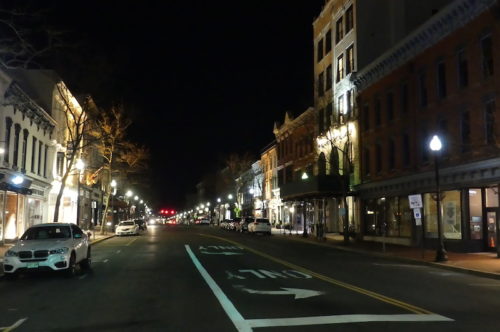 Broad Street was nearly empty of pedestrians on a Friday night in late March. (Photo by John T. Ward. Click to enlarge.)

The formation of the committee, consisting of elected officials, business representatives and emergency-response planners, was announced on the borough website Wednesday afternoon.

The purpose of the committee is “to plan for an accelerated, flexible strategy that will creatively expand outdoor capacity for restaurants and retail sales,” according to the announcement.

“This forward thinking group will review opportunities for the use of sidewalks, parking lots, on-street parking spaces, parks, and other outdoor spaces,” it said. “This could include street closures for the creation of new outdoor plazas and seating areas.”

Also on the table: a review of draft guidance from the New Jersey Division of Alcohol and Beverage Control “that may allow establishments with liquor licenses to extend their premises,” the announcement said.

Mayor Pasquale Menna told redbankgreen that the committee will begin discussions next week, in anticipation of an eventual move by Governor Phil Murphy to expand public access to restaurants, which remains limited to takeout services.

“As soon as the governor’s order comes through, we will be ready,” Menna said.

Under consideration are expanded use of sidewalks, and the possible use of portions of parking lots, all of which “has to be balanced with the general public’s rights” to access and use those facilities, he said.

He declined to commit to an oft-made suggestion: that portions of Broad or Monmouth streets be shut down for mid-street dining.

“I’m not sure we can address that because of practical issues,” he said, “but that’s what this committee is going to explore.”

Named to the committee, along with Menna, were:

The committee’s formation is one more example of borough officials working with the business community “to find ways to safely facilitate guidelines and direction from the State,” the announcement said.

As reported earlier this week, a new quick-pickup parking program rolled out by the borough government dedicates parking spaces outside clusters of stores and restaurants for five-minute, free parking so customers can pick up pre-0rdered food and merchandise.

The spaces were created under police authority to enforce the Murphy’s emergency order that partially removes restrictions on non-essential retailing, borough officials said.

The announcement said residents and members of the business community are welcome to submit their ideas for consideration to recovery@redbanknj.org . Emails sent to that address may not receive individual responses but will be reviewed, the announcement said.

Additional groups will be established and announced in the near future to quickly address the economic revitalization needs of other neighborhoods, Menna said.

“Each neighborhood has different circumstances” that must be examined individually, he said.