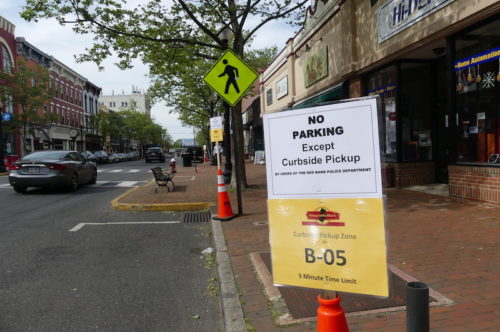 Downtown shoppers will be able to park in designated spots for quick pickups from restaurants and retail stores throughout town. (Photo by John T. Ward. Click to enlarge.)

With merchants starting to emerge from the COVID-19 lockdown, Red Bank officials unveiled a temporary parking plan Monday aimed at helping them regain an economic toehold. 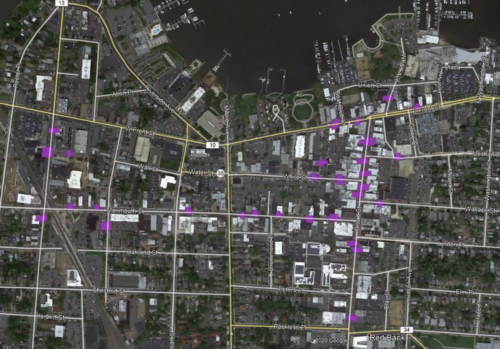 As part of a gradual easing of unprecedented restrictions on activity he imposed March 21, Governor Phil Murphy last week lifted a ban on non-essential retail business, which became effective Monday.

Under the executive order, customers are not permitted into stores, and must instead order goods in advance for pickup at curbside or just outside shop entrances.

Working with Red Bank RiverCenter, borough officials came up with a parking plan that expanded on one in place for the past month for restaurants only: short-term parking spaces for quick pickups of orders.

The plan designates 36 zones of one or several parking street spaces, located near “clusters” of stores and restaurants from Bridge Avenue to Wharf Avenue, said Shehady.

Each zone is marked off with cones and temporary signage bearing the zone’s number, such as “EP01” for an area of the English Plaza parking lot, or M01 for a spot on Monmouth Street. That’s to help customers and merchants coordinate quick pickups, he said.

A customer “can text you and say, ‘hey, I’m in WS02, come find me,’ and you’ll know where to go,” Shehady told merchants.

A scalable version of the map shown above is available here.

Chief Darren McConnell said that because of physical limitations and safety issues, “we can’t possibly accommodate every single business with its own space, which is why we’re doing it in zones.”

McConnell said the process of designating the zones was “evolving,” and that he welcomed feedback from merchants.

“If you have a solid recommendation on where we need one and why, we’re happy to take a look at it,” he said.

Key to the plan working is that the spaces not be used by employees, Shehady said. They should be told to leave their vehicles in longterm lots, he said.

Parking is limited to five minutes, though McConnell indicated that police and parking enforcement employees would not be ticketing vehicles, except those that are clearly lingering.

At present, street parking across town is free, given that nearly all street meter heads have been removed in anticipation of replacement, “so no payment is possible at the curbside pickup spots,” Shehady told redbankgreen.

Installation of new meters was expected this month, Shehady said in April.

But are the temporary spots legal, given that the borough council has not amended the parking ordinance to designate them?

Shehady told redbankgreen via email that they are allowed under the police department’s “authority to impose temporary parking prohibitions/restrictions during an emergency.

“These are just that, temporary parking restrictions in a State of Emergency, and the Executive Orders permit OEM/Police to enact such measures to facilitate the EOs,” he said.

“Based on this experience, however, we intend to propose ordinance amendments that would allow this sort of flexibility on an as-needed basis in the future,” he said.