VIRUS UPDATE: NO CLARITY ON GRADUATIONS 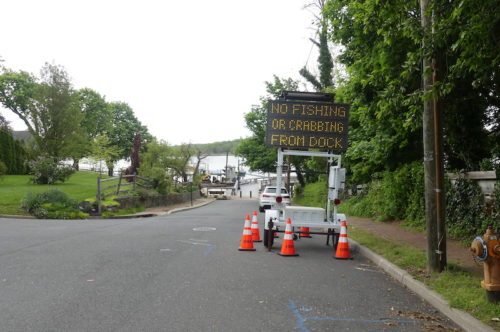 Fair Haven’s municipal dock is open for taking in the vista along the Navesink River, but remains off-limits for fishing and crabbing. (Photo by John T. Ward. Click to enlarge.)

Governor Phil Murphy is still trying to “figure out” how to hold safe graduation ceremonies under the lingering threat of a resurgent COVID-19 pandemic, he said Tuesday.

• At his daily briefing on the pandemic, a reporter asked Murphy why graduation ceremonies couldn’t be permitted with attendees staying six feet apart, under the watch of police, much as visitors are allowed on beaches and boardwalks.

To parents and seniors who have asked him if there’s any hope of such ceremonies in the foreseeable future, Murphy said: “They do have a right to have hope, but I would add to that, ‘bear with us: we’re trying to figure that one out, and I hope sooner than later.”

• State Health Commissioner Judy Persichilli reported that New Jersey now has had 12 cases of multisystem inflammatory syndrome in children, a dangerous ailment, with 9 of the patients having confirmed COVID-19. They range in age from 3 to 18 years old, she said.

Three of the victims remain hospitalized, and no deaths from the condition have been reported, she said.

• Statewide, the pandemic has killed or played a role in the deaths of 10,586 residents, according to the state’s COVID-19 dashboard, an increase of 151 from Monday’s report.

The latest figures include 12 more Monmouth County deaths, for a total of 520.

• For the first time, the state reported data regarding longterm care facility staff and patients cases and fatalities.

In Monmouth county, which has had 51 facilities with outbreaks, residents accounted for 1,390 cases and 382 deaths; staff accounted for 586 cases and 4 deaths, the state reported.

Specific locations were not disclosed.

Statewide, there have been 19,454 resident cases at care facilities, and 5,368 resident deaths. Staffer accounted for 8,858 cases and 98 deaths, the report said.

• Monmouth County’s government reported 7,527 confirmed COVID-19 cases as of Tuesday, an increase of 79 from Monday. Here are the cumulative case totals by town:

• Here are the latest statewide COVID-19 figures, according to the state Health Department’s COVID-19 dashboard:

Patients in intensive/critical care: 977, down 76