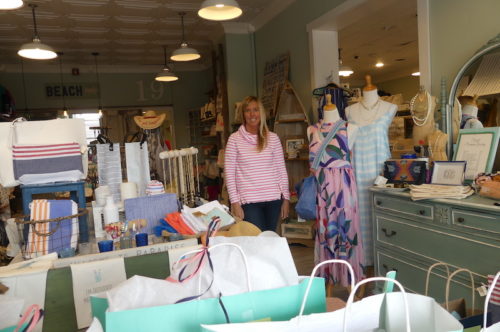 Kris Winters says her White Street shop, Cabana 19, was just getting back on its feet from last year’s streetscape disruption when the pandemic hit. (Photo by John T. Ward. Click to enlarge.)

A Red Bank construction project looms large for some business owners as they start to crawl out from under one of the worst economic crises in American history.

They’re pleading for “empathy” as they try to avoid a third consecutive blow in one year. 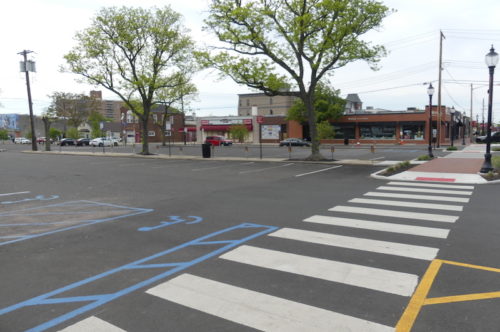 The White Street lot has been nearly empty for more than two months. Below, a concept plan showing new angled parking slots on White Street. (Photo by John T. Ward. Click to enlarge.)

At issue is a streetscape makeover of the western end of White Street, plus a reconfiguration of the adjoining 2.3-acre municipal parking lot, the town’s largest.

The eastern end of White Street and the English Plaza parking lot got a makeover that began this time last year and took four months to complete. Though the work was staged to minimize impacts, reduced access to their businesses hit some merchants hard.

Kris Winters, who owns the beach-themed Cabana 19 clothing and housewares boutique, told redbankgreen she was just getting back to profitability in early March when the COVID-19 pandemic hit, prompting a statewide shutdown of economic activity by Governor Phil Murphy.

As of Monday, Cabana 19 was back in business, though under Murphy’s new limits on non-essential stores: retailers can’t allow customers into their shops, and instead must conduct doorway or curbside commerce. For Winters, it’s a helpful start.

“I’m keeping the lights on,” she said, standing more than six feet behind a door-blocking table covered in bagged orders ready for customer pickup. “I’m losing tons of revenue, but I’m generating at least a little to pay my rent and utilities.”

But almost immediately, she’s facing the prospect of another year in which her busiest months get wiped away by a public works project, she said.

Winters said she’s hoping that a new quick-pickup parking program rolled out by the borough government this week will continue to allow her customers to park in front of her shop throughout the construction.

In late April, the borough council awarded a $975,975 contract to Lima Charlie of Freehold for the streetscape. According to borough Business Administrator Ziad Shehady, work is expected to begin in June.

After underground utilities below White Street are replaced, the street will be be temporarily paved over for a 90-day settlement period, during which work is expected to begin on the parking lot.

Under the terms of New Jersey Department of Transportation funding for White Street, the project cannot be postponed, as key deadlines have to be hit, pandemic or no pandemic, Shehady told redbankgreen via email.

Moreover, the borough isn’t inclined to delay the work, he acknowledged.

It’s better for the town to move ahead “because contractors are eager for work, which means this gets us lower bids, further saving taxpayers money,” he said. And even though business reopenings are on the horizon, the current restrictions on stores and restaurants “mean there is still slowdown of traffic compared to normal levels, so it does not make sense to delay it when everything is back to normal,'” he said.

On a Zoom call Monday with retailers, restaurateur George Lyristis asked Shehady why the borough couldn’t do the parking lot makeover first, and immediately, given that it’s nearly empty, and tackle the street job later.

Shehady said the bidding for that lot portion of the project was still open, but that once a contract is awarded, “we may be able to do that first.”

Lyristis, who with his brothers owns Bistro on Broad Street and Teak on Mommouth Street, later told redbankgreen that while he understands that borough officials have jobs to do, “a little empathy while this is happening goes a long way.

“We as businesses owner are terrified of our future, and Red Bank’s future, so this project needs to be done right and scheduled with as little impact as possible,” he said via text. “English Plaza ruined our 2019, and this will be worse.”

On Monday’s call, Paul Musho, owner of ChillRx Cryotherapy Center on Broad Street, pressed officials to strongly communicate both the pickup-parking plan and alternative parking options so shoppers know that “Red Bank is open for business.

“If we start telling people that the town is under construction, it’s just going to compound the whole problem we have here,” Musho said. “No one’s going to come into town.”