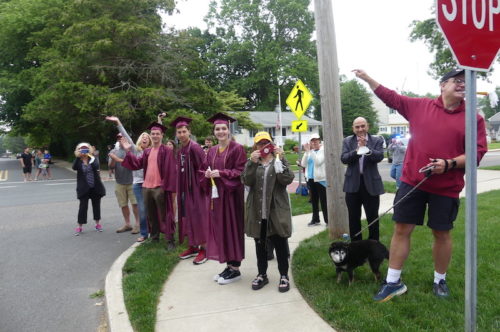 Clad in their graduation caps and gowns and surrounded by family and neighbors, Red Bank Regional High School seniors got a loud and literally moving sendoff Wednesday evening.

Dubbed the ‘Buc Brigade,’ the event featured blaring sirens on police, fire and first aid vehicles as they traced a route through the school’s three sending districts of Little Silver, Red Bank and Shrewsbury.

Among the numerous clusters of participants was the one above, at Patterson Avenue and Samara Drive in Shrewsbury.

The parade followed a virtual commencement ceremony held on YouTube. Opening the event, senior class President Grace Conway told viewers that, “although this is not the end to senior year that we were anticipating, I think this experience only demonstrates our class’s perseverance and ability to adapt to change as we prepare to enter the next chapter of our lives.”

Simultaneous with the Buc Brigade, Kelly Rossano was honored by the Red Bank council during its regular, if also virtual, meeting as the borough’s highest-ranking senior. She plans to study architecture at Rensseleaer Polytechnic Institute in the fall, according to Councilwoman Kathy Horgan.

Here is a resolution calling Kelly out as an “amazing role model” for her schoolwork and extracurricular activities, which have included volunteering in the radiology and pathology labs at Riverview Medical Center.