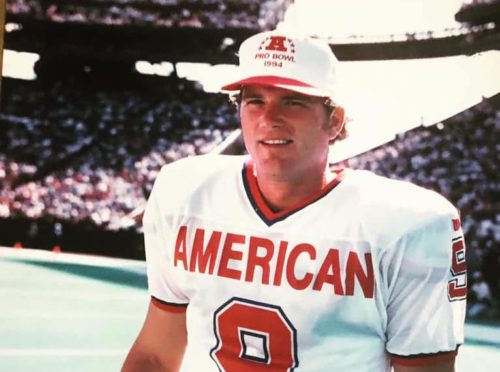 Greg Montgomery Jr., a former pro football punter, mental health advocate and 2014 inductee into the Red Bank Regional Hall of Fame, died August 23, according to an obituary published Thursday by the Grand Rapids Press in Michigan. He was 55 years old.

Montgomery, who grew up in Shrewsbury and Little Silver, played baseball and football at RBR, where he turned, reluctantly, to punting after an injury forced him to give up playing linebacker, according to a 1997 profile in the Baltimore Sun.

But he excelled in the position, and after his 1983 graduation, Montgomery played for Penn State before a transfer to Michigan State, where his father, Gregory Sr., had played quarterback in the 1950s.

In 1988, he was drafted into the National Football League by the Houston Oilers, and later played for the Detroit Lions and the Baltimore Ravens over a nine-year career.

Along the way, Montgomery racked up numerous achievements, including being named all-time best punter in MSU history and selected to punt for the AFC in the 1994 Pro Bowl.

Following  his football career, Montgomery became an advocate for people suffering from mental health issues, speaking about his own experience in an effort to destigmatize bipolar disorder. Here’s a video in which Montgomery discusses his struggles.

He “succumbed to the illness he bravely battled for many years,” according to the obituary.  The Gregory H. Montgomery Jr. Foundation for Ultimate Growth has launched a Go Fund Me drive to raise money for mental health resources.

A celebration of Montgomery’s life is planned for October 24 at a private residence in Little Silver, according to the obituary.