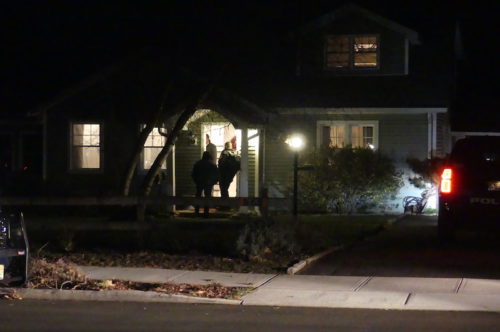 [UPDATE] Police arrested one person following a report of a hostage situation in Little Silver, a spokesman for the Monmouth County Prosecutor’s office said Wednesday night.

“One individual has been arrested by Little Silver PD and is being charged with 2nd degree false public alarm,” following a report of a hostage situation with a barricaded subject, spokesman Charles Webster told redbankgreen shortly  after 7 p.m.

The incident centered on 465 Branch Avenue, began around 3 p.m. and involved heavily armed officers and widespread traffic detours for about three hours.

After police left, two men answered the door at the house, and one told redbankgreen that a “guest” had had a “mental breakdown, and said some shit that wasn’t true.”

There had been no hostage situation, and police had gone through “the whole house,” he said, before abruptly closing the door.

Residents of a house several doors away told redbankgreen they had been evacuated by police to the nearby Markham Place School without explanation for about three hours.

Posted on December 2, 2020 at 6:50 pm, filed under Crime, Featured, Law & Justice, LITTLE SILVER and tagged Crime, little silvern, nj, police. Bookmark the permalink. Follow any comments here with the RSS feed for this post. Trackbacks are closed, but you can post a comment. Email this story.
PREVIOUS: LITTLE SILVER: HEAVY POLICE ACTIVITY NEXT: LITTLE SILVER: ANOTHER REVERSAL FOR RBR